Consequent to sanction of an additional instalment of Dearness Allowance vide this Ministry’s letter No.PC-VI/2008/I/72/1 dated 24.09.2015, the President is pleased to decide that the rates of Night Duty Allowance as notified vide Annexures “A” and “B” of Board’s letter No.E(P&A)II-2015/HW-1 dated 08.06.2015 stand revised with effect from 01.07.2015 as indicated at Annexure “A” in respect of “continuous”, “Intensive”, ‘Excluded’ categories and workshop employees, and as indicated at Annexure ‘B’ in respect of ‘Essentially Intermittent’ categories.

2. This issues with the concurrence of the Finance Directorate of the Ministry of Railways. 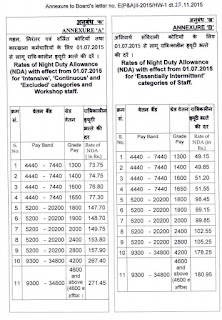