THE CHIEF SECRETARIES OF ALL STATES/UTS

In accordance with the provisions contained in Schedule I of the Indian Administrative Service (Pay) Rules, 2016, the initial pay of a promoted officer or an officer appointed by selection, as the case may be, shall be fixed after grant of an increment at the stage of the senior scale next above his actual pay provided that if such stage of pay happens to be common to different components of the Senior Scale, pay shall be fixed in the lower or the lowest component, as the case may be, of the Senior Scale.

2. The Rule 5(6) of IAS (Pay) Rules, 2016 provides for the fixation of pay of a Member of Service on promotion to Selection Grade (Level -13) of Pay Matrix by adding one increment in the Level-12 of the Pay Matrix and two additional increments in the Level 13 to which he is promoted. Rule 5 (5) of IAS (Pay) Rules, 2016 provides that the pay of a member of the Service in the Senior Time Scale shall, on promotion to the Junior Administrative Grade, be fixed in Level 12 of the Pay Matrix.

3. Subsequent to the implementation of 7th CPC recommendations, queries have been raised by various State Governments on the following issues:

(a) Regulation of increments on actual promotion of officers to JAG/Selection Grade when pay was fixed initially in PB-4 (GP 8700) to protect the pay drawn in the State Civil Service.

(b) Fixation of pay officers who were promoted to IAS in Senior Time Scale/Junior Administrative Grade after 01.01.2016.

4. In this regard, it is clarified in respect of para 3(a) and in view of the extant provision of Rule 5(6) of lAS (Pay) Rules, 2016, the two additional increments due to MoS inducted into the IAS and on actual promotion to the Selection grade/JAG cannot be denied due to pay being initially fixed in the Selection grade/JAG. In such cases, the State Government may kindly ensure that the pay of these officers on actual promotion to JAG/Selection Grade are re- fixed (only for the purpose of fixing pay on promotion) at Level 11/12 of the Pay Matrix as per current pay drawn and given one increment in the Junior Scale and thereafter two additional increments shall be allowed at the Level to which the officer has been promoted.

5. In respect of para 3(b), the initial pay of an officer inducted into the IAS shall be fixed in the respective level of the Senior Scale i.e Level 11, 12 or 13 based on the year of allotment in the IAS. However, the pay drawn in the state civil services will be protected in the concerned Level. An illustration of pay fixation of an officer inducted in IAS is given below: 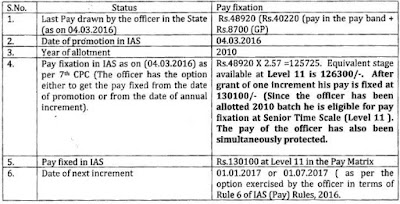 6. The Rule 6 of IAS (Pay) Rule, 2016 provides for exercise of option of fixation of pay by the officers as under:

7. All the State Governments are requested to adhere/comply with the aforesaid instructions while fixing the pay of promoted IAS officers.

8. This issues with the approval of the competent authority.
Yours faithfully,

Sd/-
(Rajesh Kumar Yadav)
Under Secretary to the Government of India