Revision of Minimum Rates of Wages

The Central Government in exercise of the powers conferred under Clause (b) of section 3 read with clause (i) of sub-section (1) of section 4 of the minimum wages Act, 1948 has revised the minimum rates of wages per day for all category of employees specified in column no. (1) of the Gazette Notification S.O.No. 186(E) for the Schedule Employment of Agriculture which is effective from the date of publication i.e. 19th January, 2017. The revised rates of minimum wages per day is given below.

The workers are eligible for the minimum wages quoted against their respective category and next VDA shall be effective from 01.04.2017 only.

The other details of notification S.O.No.186 (E) is available in Ministry of Labour 86 employment website labour.gov.in 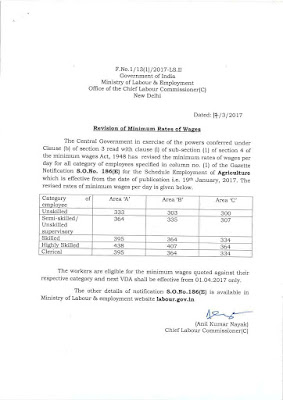