Subject: Applicability of Central Civil Services (Revised Pay) Rules, 2016 to persons re-employed in Government Service after retirement and whose pay is debitable to Civil Estimates.


The pay fixation of re-employed pensioners on re-employment in Central Government, including that of Defence Forces personnel/officers, is being done in accordance with Central Civil Services (Fixation of Pay of Re-employed Pensioners) Orders, 1986, issued vide this Department's O.M. No. 3/1/85-Estt. (Pay II) dated 31st July, 1986 (as revised from time to time). Persons re-employed in Government service after retirement have been excluded from the purview of the Central Civil Services (Revised Pay) Rules, 2016 vide Rule 2 (2)(vii) thereof. The question of extension of the benefit of the revised pay rules to these persons and the procedure to be followed for fixing their pay in the revised pay structure has been considered by the Government.

The President is pleased to decide that, in partial modification of the Rule 2 (2)(vii) of the Central Civil Services (Revised Pay) Rules, 2016, the provisions of these rules shall apply to such persons also who were in / came into re-employment on or after 1st January, 2016, subject to the orders hereinafter contained. This decision will cover all Government servants re-employed in Central Civil Departments other than those employed on contract except where the contract provides otherwise, whether they have retired with or without a pension and/or gratuity or any other retirement benefits, e.g. contributory fund etc. from a civil post or from the Armed Forces.

2. Re-employed persons who become eligible to elect revised pay structure in accordance with these orders should exercise their option in the manner laid down in Rule 5 and 6 of the Central Civil Services (Revised Pay) Rules, 2016, within three months of the date of issue of these orders or in cases where the existing scales of pay of the posts held by them are revised subsequent to the issue of these orders, within three months of the date of such order.

3 (a) The initial pay of a re-employed Government servant who elects or is deemed to have elected to be governed by the revised pay structure from the 1 st day of January, 2016 shall be fixed according to the provisions of Rule 7 of the C.C.S. (R.P.) Rules, 2016, if he/she is-

(i) a Government servant who retired without receiving a pension, gratuity or any other retirement benefit and

(ii) a retired Government servant who received pension or any other retirement benefits but which were ignored while fixing pay on re-employment.

3(b) The initial pay of a re-employed Government servant who retired with a pension or any other retirement benefit and whose pay on re-employment was fixed with reference to these benefits or ignoring a part thereof, and who elects or is deemed to have elected to be governed by the revised structure from the 1 st day of January, 2016 shall be fixed in accordance with the provisions contained in Rule 7 of the Central Civil Services (Revised Pay) Rules, 2016. Pension (excluding the ignorable portion of pension, if any), as defined in para 3(1) of CCS (Fixation of Pay of Re-employed Pensioners) Orders, 1986 admissible on relevant date, i.e. date of coming over to the revised pay structure, effective from 1.1.2016 or later, shall be deducted from his / her pay in accordance with the general policy of the Government on fixation and subsequent drawal of pay of re-employed pensioners.

3(c) In addition to the pay so fixed, the re-employed Government servant would continue to draw the retirement benefits he / she was permitted to draw in the pre revised scales, as modified based on the recommendations of the Seventh Central Pay Commission, orders in respect of which have been issued separately by the Department of Pension & Pensioners' Welfare.

3(d) Where a re-employed Government servant elects to draw his / her pay in the existing pay structure and is brought over to revised pay structure from a date later than the 1st day of January, 2016, his /her pay from the later date in the revised scale shall be fixed in accordance with the provisions of Rule 11 of the Central Civil Services (Revised Pay) Rules, 2016.

4. Further, the existing ceiling of Rs. 80,000/- for drawal of pay plus gross pension on re-employment is enhanced to Rs.2,25,000/-, the maximum basic pay prescribed for Secretary to the Government of India under Central Civil Services (Revised Pay) Rules, 2016.

5. The President is also pleased to enhance the ignorable part of pension from Rs. 4000/- to Rs. 15,000/- (Rupees Fifteen Thousand) in the case of Commissioned Service Officers and Civil Officers holding Group 'A' posts who retire before attaining the age of 55 years. The existing limits of civil and military pensions to be ignored in fixing the pay of re-employed pensioners will, therefore, cease to be applicable to cases of such pensioners as are re-employed on or after 1.1.2016.

Fixation / drawal of pay of employees appointed on re-employment basis on or after 1st day of January, 2016

7. Pursuant to the introduction of the system of Pay Matrix vide the Central Civil Services (Revised Pay) Rules, 2016, the President is further pleased to amend the relevant provisions of CCS (Fixation of Pay of re-employed Pensioners) Orders, 1986 in the manner indicated below:- 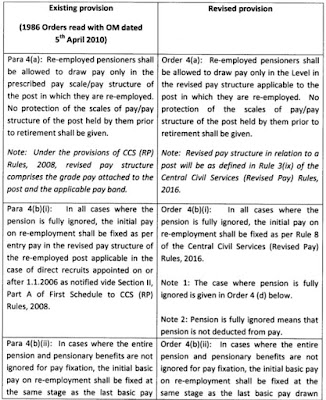 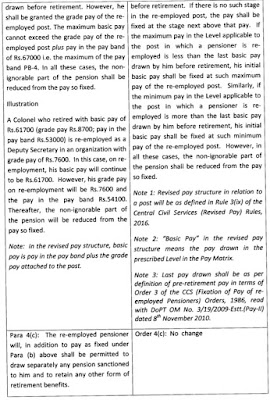 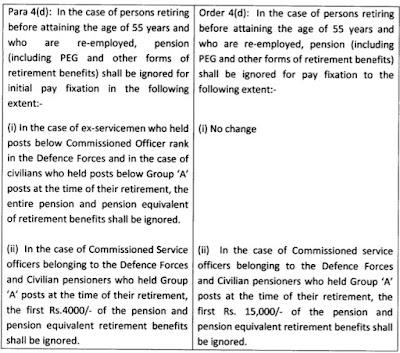 8. Apart from the above, it is also clarified as under: -

(i) Drawal of increments: Once the initial pay of the re-employed pensioner has been fixed in the manner indicated above, he will be allowed to draw normal increments as per the provisions of Rule 9 and 10 of CCS (RP) Rules, 2016 read with Order 5 of the CCS (Fixation of Pay of re-employed Pensioners) Orders, 1986.

(ii) Treatment of Military Service Pay (MSP): MSP is granted to Defence Forces officers/personnel while they are serving in the Defence Forces. Accordingly, on their re-employment in civilian organizations, including secret organizations under the Cabinet Secretariat umbrella, the question of grant of MSP to such officers/personnel does not arise. However, the benefit of MSP in the pension should not be withdrawn. Accordingly, while the pension of such re-employed pensioners will include the element of MSP, they will not be granted MSP as part of pay while working in civilian organizations. Also, in respect of all those Defence Officers / personnel, whose pension contains an element of MSP and whose pay on re-employment is subject to deduction of pension (excluding the ignorable portion, if any), the element of MSP as contained in the pension shall be ignored while deducting the pension at the time of pay fixation. In other words, the MSP portion of the pension need not be deducted from the pay fixed on re-employment.

(iii) Fixation / drawal of pay of re-employed persons who retired prior to 1.1.2016 and who have been re-employed after 1.1.2016, and whose entire pension and pensionary benefits are not ignored for pay fixation: The pay on re-employment will be fixed in terms of Order 4(b)(ii) of the CCS (Fixation of Pay of Re-employed Pensioners) Orders, 1986, as amended above, after notionally arriving at their revised basic pay at the time of retirement as if they had retired under the revised pay structure, in terms of Rule 7 of the Central Civil Services (Revised Pay) Rules, 2016. In all these cases, the non ignorable part of the pension shall be reduced from the pay so fixed. Regulation of MSP, however, shall be as per clarification in para 8(ii) above.

(iv) Fixation / drawal of pay in all other cases: Pay fixation in cases not covered in Order 4(d) will be as per the general principle of 'pay minus pension', i.e. while the last pay drawn shall be reckoned for pay fixation, the entire pension shall be deducted from the pay so fixed. Regulation of MSP, however, shall be as per clarification in para 8(ii) above.

9. An undertaking may be obtained from re-employed pensioners who opt / are deemed to have opted for the revised pay structure to the effect that, they understand and agree that the special dispensation provided through this O.M. is subject to the condition of deduction of pension as admissible to them from time to time, wherever required as per extant instructions.

10. These instructions shall apply in respect of those re-employed pensioners who are re-employed against civil posts carrying pay upto Level 17 of the Pay Matrix of CCS(RP) Rules, 2016.

11. In so far as the persons serving in the Indian Audit & Accounts Department are concerned, these orders are being issued after consultation with the Comptroller & Auditor General of India.

Sd/-
(Pushpender Kumar)
Under Secretary to the Government of India.