i. The recommendations of 7th CPC to abolish Launch Campaign Allowance and Space Technology Allowance has not been accepted. In order to incentivize the supporting employees in Space and Atomic Energy sector, the rate of Launch Campaign and Space Technology Allowance has been increased from ₹7500 per annum to ₹11250 per annum. Professional Update Allowance for non-gazetted employees of Department of Atomic Energy will also continue to be paid at the enhanced rate of ₹11250 per annum. 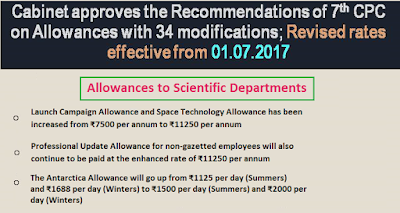