EMPANELMENT OF 189 HOSPITALS/NURSING HOMES AND DIAGNOSTIC CENTRES FOR ECHS

2. Regional Centres will initiate action to complete the formalities required for empanelling hospitals approved for empanelment vide letter under reference. A Memorandum of Agreement (MoA) will be signed with each of the Hospital by the Director, Regional Centre ECHS concerned. The MoA will be made on Rs 100/- (Rupees one hundred only) non judicial stamp paper and will be valid for two years from the date of signing of the agreement. The payment for the stamp paper will be made by the empanelled facility. The following documents will be attached to MoA as Annexures:-

(a) Health facilities for which recognised. (Copy of Annexure of Govt letter pertaining to hosp).

(b) Negotiated Rates (only one rate per code No. as applicable to the medical facility will be mentioned and negotiated rated would be lower than CGHS rates).

3. Rates applicable will be as per prevalent CGHS rates/negotiated/existing hospitals rates whichever is lower (to be indicated by asterix).

Disposal of Application Forms and MoA

4. Application forms in respect of the Hospitals approved for empanelment by DoESW of MoD will be returned by the Central Organisation, ECHS to the Regional Centres concerned from where they originated.

6. The original and duplicate copies of MoA will be retained by the Regional Centres and the empanelled facility respectively. Additional photocopies of MoA alongwith Annexures including rates will be forwarded/distributed as under:-

7. Formal referrals to empanelled facilities as per laid down procedures can commence after signing of the MoA.

1. I am directed to state that in terms of the provisions of Govt of India, Ministry of Defence letter No. 22B(04)/2010/US(WE)D(Res) dated 18 Feb 2011 and 22B(02)/2013/US(WE)D(Res) dated 18 Oct 2013, it has now been decided by the 10th Screening Committee for empanelment of Medical facilities with ECHS in its meeting held on 10 Mar 2017 under the chairmanship of MD ECHS to empanel 189 Private Hospitals/Nursing Homes and Diagnostic Laboratories for different specialties and procedures as per the list attached in the Annexure:- 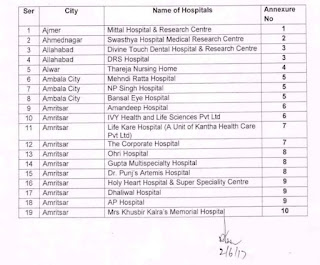 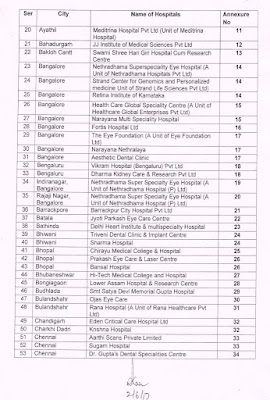 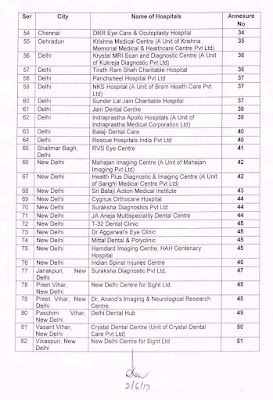 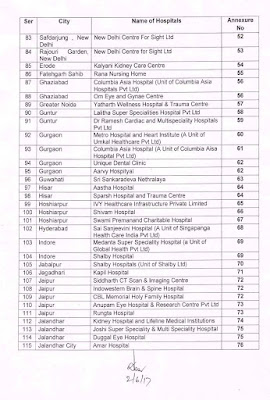 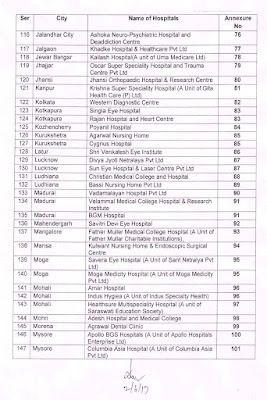 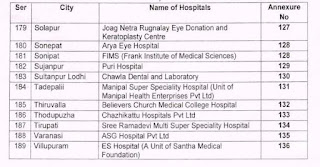 2. All the terms and conditions including fixation of rates payable to empanelled hospitals will be regulated under Govt of India, Ministry of Defence letter No 22B(04)/2010/US(WE)/D(Res) dated 18 Feb 2011 and amended from time to time.

3. The rates for ECHS Hospital/Nursing Home, Dental Centres and Diagnostic Centres as approved by the Empowered Committee will be as per CGHS rates and will be notified by the Director, Regional Centre ECHS to all concerned including Polyclinics, SEMOs, CDNPCDA and Central Organisation ECHS.

Sd/-
(AK Karn)
Under Secretary to the Govt of India