The undersigned is directed to refer to Office Memorandum No. 22/10/2015- CS-I (APAR) dated 18th January, 2017 regarding introduction of on-line recording system of APARs for US level officers for CSS and equivalent levels in CSSS. The Ministries/Departments were requested to take necessary action for creation and generation of APARs before 20th March, 2017 so that the officer concerned are able to submit their self-appraisal from 1st April, 2017. On assessment of progress made for SPARROW for CSS/CSSS, it is observed that in many Ministries/Departments the process of creation of data and generation of APARs is not yet completed. This might be due to various factors such as non-availability of basic data of officers, non-creation of data at the end of the NIC, problems in setting up work flows of officers, problems in data transfer at various levels, problems in e-signing etc.

2. The matter has been considered in this Department and it has been decided to extend datelines for submission of APAR on 'SPARROW'- CSS/CSSS as per Annexure to this OM.

3. Ministries/Departments are requested to take necessary action towards generation of APARs as per the revised time-lines. It is clarified that it will not be possible to extend these time-lines further. The Ministries/Departments are also advised to ensure following actions at the level of EMI) (Employee Master Data Manager) for smooth functioning of 'SPARROW' system :-

i) Employee data of all the officers in the Ministry/Department should be kept updated in PIMS.

ii) The officers leaving the organizations/new joinees should be taken on roll or transferred to other Departments as and when such events occur.

iii) All the primary details of the officers such as Aadhar no., mobile no., e-mail i.d. should be exactly the same as shown in the records.

4. All the Ministries/Departments are also requested to intimate Progress made in implementation of ‘SPARROW’ in their Departments in the following format:- 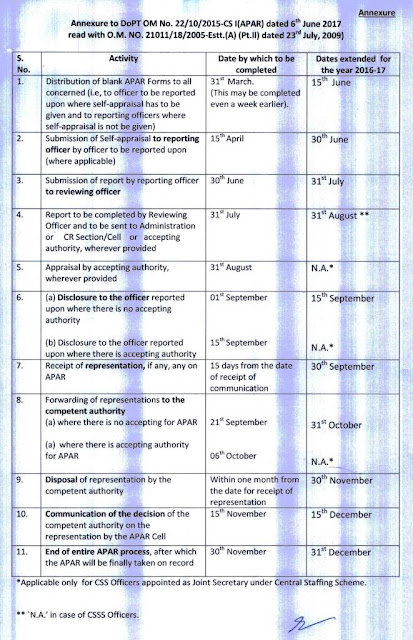