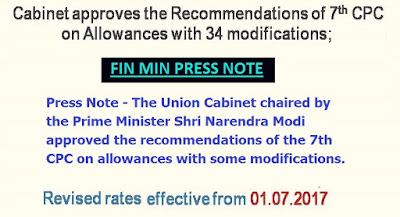 The Union Cabinet chaired by the Prime Minister Shri Narendra Modi approved the recommendations of the 7th CPC on allowances with some modifications. The revised rates of the allowances shall come into effect from 1st July, 2017 and shall affect more than 48 lakh central government employees.

While approving the recommendations of the 7th CPC on 29th June, 2016, the Cabinet had decided to set up the Committee on Allowances (CoA) in view of substantial changes in the existing provisions and a number of representations received. The modifications are based on suggestions made by the CoA in its Report submitted to Finance Minister on 27th April, 2017 and the Empowered Committee of Secretaries set up to screen the recommendations of 7th CPC.

The 7th CPC had adopted a three-pronged approach in examining a total of 197 allowances which involved an assessment of the need for continuation of each allowance, appropriateness of the set of people covered by the allowance and rationalisation which involved clubbing of allowances with similar objectives. Based on the examination on these lines, the 7th CPC recommended that 53 allowances be abolished and 37 be subsumed in an existing or a newly proposed allowance.

For most of the allowances that were retained, the 7th CPC recommended a raise commensurate with inflation as reflected in the rates of Dearness Allowance (DA). Accordingly, fully DA-indexed allowances such as Transport Allowance were not given any raise. Allowances not indexed to DA were raised by a factor of 2.25 and the partially indexed ones by a factor of 1.5. The quantum of allowances paid as a percentage of pay was rationalised by a factor of 0.8.

A new paradigm has been evolved to administer the allowances linked to risk and hardship. The myriad allowances, their categories and sub–categories pertaining to civilians employees, CAPF and defence personnel have been fitted into a table called the Risk and Hardship Matrix (R&H Matrix). The Matrix has nine cells denoting varying degrees of risk and hardship with one extra cell at the top named as RH - Max to include Siachen Allowance. Multiple rates applicable to individual allowances will be replaced by two slab rates for every cell of the R&H Matrix.

Modifications approved by the Cabinet

The modifications approved today were finalised by the E-CoS based on the recommendations of the CoA. The CoA had undertaken extensive stakeholder consultations before finalising its recommendations. It had interacted with Joint Consultative Machinery (Staff side) and representatives from various staff associations. Most of the modifications are on account of continuing requirement of some of the existing arrangements, administrative exigencies and to further the rationalization of the allowances structure.

The modifications approved by the Government in the recommendations of the 7th CPC on allowances will lead to a modest increase of ₹1448.23 crore per annum over the projections made by the 7th CPC. The 7th CPC, in its Report, had projected the additional financial implication on allowances at ₹29,300 crore per annum. The combined additional financial implication on account of the 7th CPC recommendations along with the modifications approved by the Cabinet is estimated at ₹30748.23 crore per annum.

Highlights of Cabinet approval on Allowances

1. Number of allowances recommended be abolishing and subsuming

6. Recommendations in respect of some important allowances paid to all employees:

8. Recommendations in respect of some important allowances paid to Indian Railways

9. Recommendations in respect of some important allowances paid to Nurses & Ministerial Staffs of Hospital

10. Recommendations in respect of some important allowances paid to Pensioners

While increasing the rate of allowances affecting the central government employees, especially the Defence, CAPF and Coast Guard personnel, the staff of Railways, Postal department and nursing staff, the total number of allowances have been rationalized from 197 to 128. Thus, the Government has shown a great deal of fiscal prudence and at the same time addressed the genuine concerns of the employees and responded to some of the administrative exigencies necessitating the modifications.