Sub: REVIEW OF THE SCHEME FOR ENGAGEMENT OF A DEPENDENT OF DECEASED GRAMIN DAK SEVAKS ON COMPASSIONATE GROUNDS

I am directed to refer to this office letters Nos. 17-17/2010-GDS dated 14.12.2010 and 17.12.2015 vide which instructions on engagement of dependents of deceased Gramin Dak Sevak on compassionate grounds have been issued.

3. The scheme will come into effect from the date of issue of the letter and will be applicable to all cases pending and arising on or after the said date. The cases which have already been settled will not be reopened.

4. The revised scheme for compassionate engagement of an eligible dependent of deceased Gramin Dak Sevaks is attached.

The object of the Scheme is to grant engagement on compassionate grounds to a dependent family member of a Gramin Dak Sevak dying while in service as a GDS, to relieve the family of the GDS concerned from financial destitution and to help it to get over the emergency.

(b) Son including adopted son; or

(c) Married son living with parents and dependent for livelihood on the GDS on the date of death of the GDS; or

(d) Daughter including adopted daughter; or

(e) Married/widowed daughter/divorced daughter wholly dependent on the GDS at the time of his/her death: or

(f) Daughter in law of deceased GDS who is wholly dependent on GDS, if the only son of the GDS is predeceased, provided she gives an undertaking that she is not availing the same benefit from her own parenthood.

(g) Brother or sister in the case of unmarried GDS wholly dependent on the GDS at the time of his/her death.

Note 2 "Gramin Dak Sevak" for the purpose of these instructions means a GDS engaged on regular basis after undergoing a formal selection procedure and not one working on adhoc/provisional basis or as a substitute or trainee.

(a) Head of Circle will be competent to make compassionate engagements to GDS posts within the Circle.

(b) All cases will be considered by a Committee on Compassionate Engagement (CCE) and recommendations of the Committee will be put up to the Head of the Circle for final decision.

The composition of CCE the will be same as the one constituted for cases of departmental officials.

4. Posts to which such engagements can be made

Compassionate engagements will be made only to GDS posts.

(a) The family deserves immediate assistance of relief from financial destitution; and

(b) Applicant for compassionate appointment should be eligible and suitable for the post in all respects as per the conditions prescribed for normal regular selection to the GDS post for which being considered.

Compassionate engagements are exempted from the observance of the following requirements:-

(a) Engagement procedure such as notification of vacancies, reference to employment exchange etc.

(b) Checking of availability of surplus posts or posts identified for redeployment etc.

a) Generally, there shall be no relaxation in age conditions except as prescribed for reserved categories. However Upper age limit could be relaxed wherever found to be necessary. The lower age limit should, however, in no case be relaxed below 18 years of age. Powers to relax the Upper age limit of the applicant are vested with Head of the Circle.

b) There shall be no relaxation in basic educational qualifications prescribed for the GDS post for which the applicant is being considered.

Note 1 Age eligibility shall be determined with reference to the date of application and not the date of engagement.

(a) Engagement on compassionate grounds should be made only on regular basis and that too only, against regular GDS vacancies.

(b) To the extent possible, compassionate engagement should be offered to a GDS post near the place where the family of the deceased GDS normally resides. However, if there are no suitable vacancies to immediately engage the applicant, any post in the same sub division or division may be offered.

(a) Subject to instructions on the subject issued and amended from time to time, any application for compassionate appointment is to be considered without any time limit and decision taken on merit of each case.

(b) Within 15 days from date of death of a GDS, the family should be informed about the scheme of Compassionate Engagement along with a list of regular GDS vacancies available in the division, as on the date of death of the GDS and acknowledgement should be obtained and kept on record.

(c) Head of the Circle should consider and decide the case within three months from the date of receipt of application.

(a) As per para 8 (b) above, the family will be informed about the scheme and vacancies by the Department within 15 days from the date of death of the GDS. Request for compassionate engagement should be submitted within a reasonable time.

(b) Requests received after one year from date of death of the GDS will be considered as belated requests. Such cases should be recommended by the CCE only if the reasons given by the applicant are found to be genuine and convincing.

(c) While considering belated requests, the CCE/Head of Circle should keep in mind the fact that the concept of compassionate engagement is largely related to the need for immediate assistance to the family of the GDS in order to relieve it from economic distress. The very fact that the family has been able to manage somehow for long should normally be taken as adequate proof that the family had some dependable means of subsistence. Therefore, examination of such cases would call for a great deal of circumspection. The decision to make appointment on compassionate grounds in such cases may, therefore, be taken only after thorough scrutiny of all facts by Committee on Compassionate Engagement.

(d) Whether a request for compassionate engagement is belated or not may be decided with reference to the date of death of the GDS and not the age of the applicant at the time of consideration.

A widow engaged on compassionate grounds will be allowed to continue in service even after re-marriage.

11. Where there is an earning member

(a) Detailed examination will be required in cases with special features, like cases of belated requests or where there is another earning member in the family etc.

Cases of missing Gramin Dak Sevaks are also covered under the scheme for compassionate engagement subject to the following conditions:-

(a) A request for grant of compassionate engagement can be considered only after a lapse of at least 2 years from the date from which the GDS has been missing, provided that:

(i) An FIR to this effect has been lodged with the Police,

(ii) The missing person is not traceable, and

(iii) The competent authority feels that the case is genuine;

(b) This benefit will not be applicable to a GDS :-

(i) who had less than two years for normal discharge from service on the date from which he/she has been missing; or

(c) Compassionate engagement in the case of a missing GDS also would not be a matter of right as in the case of others and it will be subject to the fulfillment of all the conditions, including availability of vacancy, laid down for such engagement under the scheme;

(d) While considering such a request, the results of the Police investigation should also be taken into account; and

(e) A decision on any such request for compassionate engagement should be taken at the level of the Head of Circle.

(a) Prescribed pro forma may be used for ascertaining necessary information and processing the cases of compassionate engagements in normal cases.

(b) An officer not below the rank of an Inspector should meet the members of the family of the GDS in question immediately after his/her death to advise and assist them in submitting necessary information for considering compassionate engagement. The applicant should be called in person at the very first stage and advised in person about the requirements and formalities to be completed by him.

(c) All cases of compassionate engagement including belated requests and cases with special features (like presence of other earning members in the family etc.) may be considered by the CCE on bi-monthly basis and its recommendations should be submitted to the Head of Circle. A final decision may be taken by the Head of Circle based on the recommendations of the Committee

(d) An application for engagement of a dependent of the deceased GDS as a GDS on compassionate grounds should be considered and decided by the Head of Circle within three months from the date of receipt of application.

(e) lf, due to any grounds, a request for compassiohate engagement is rejected, a speaking order should be issued by the Head of Circle.

14. Undertaking for maintenance of the family of the deceased GDS

A person engaged on compassionate grounds under the scheme should give an undertaking in writing that he/she will properly maintain the other family members who were dependent on the GDS in question and in case it is proved subsequently (at any time) that the family members are being neglected or are not being maintained properly by him/her, the engagement may be terminated forthwith. Such a clause will also be incorporated as one of the additional conditions in the offer of engagement applicable only in the case of engagement on compassionate grounds.

15. Request for chance in post/person

When a person has been engaged on compassionate grounds to a particular GDS post, the circumstances, which led to such engagement, should deem to have ceased to exist. Therefore,

(a) he/she should strive in his/he career like any other GDS for future advancement and any request for engagement to any higher post on consideration of compassion should invariably be rejected.

(a) The compassionate engagement can be terminated on the ground of non compliance of any condition stated in the offer of engagement after providing an opportunity to the person concerned by way of issue of show cause notice asking him/her to explain why his/her services should not be terminated for non-compliance of the condition(s) in the offer of engagement and for this purpose, it is not necessary to follow the detailed disciplinary procedures prescribed in rules/instructions.

(b) The power of termination of engagement for non-compliance of the condition(s) in the offer of compassionate appointment will vest only with the Head of Circle, in all cases.

On behalf of the Department of Posts, I would like to express my deepest condolences.

The Department has a scheme for engagement .of a dependent of deceased GDS on compassionate grounds. Depended may apply for the post of GDS if vacancy is available and otherwise eligible. Department's representative will soon contact you for completing official formalities and paper works. You are advise to submit your request in this regard to my office within a month.

Presently, the following posts of GDS near the place of your residence are vacant: 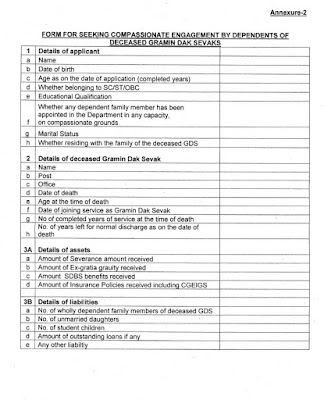 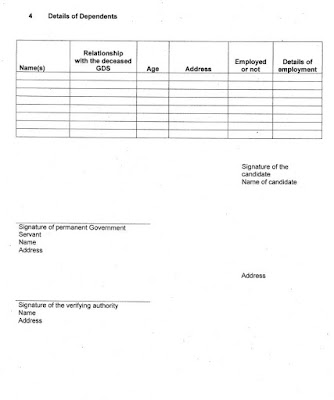