Subject: Grant of Fixed Medical Allowance (FMA) to the Central Government Pensioners residing in areas not covered under CGHS.

The undersigned is directed to say that at present Fixed Medical Allowance (FMA) is granted to the Central Government pensioners/family pensioners residing in areas not covered under Central Government Health Scheme administered by the Ministry of Health & Family Welfare and corresponding health schemes administered by other Ministries/Departments for their retired employees for meeting expenditure on their day-to-day medical expenses that do not require hospitalization. Orders were issued vide this Department's O.M. No. 4/25/2008-P&PW(D) dated 19-11-2014 for enhancement of the amount of Fixed Medical Allowance from Rs. 300/- to Rs. 500/-per month w.e.f. 19.11.2014

4. In their application to the persons belonging to the Indian Audit and Accounts Department, these orders issue in consultation with the Comptroller and Auditor General of India vide their UO No. 169-Staff (Rules)/A.R/01-2016 dated 18.07.2017. 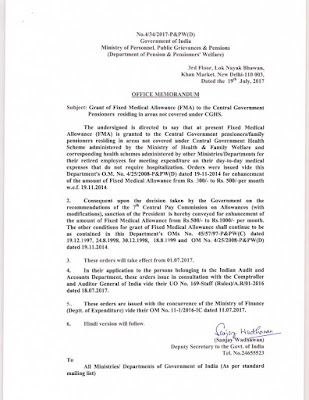