GOVERNMENT OF INDIA
MINISTRY OF DEFENCE
DEPARTMENT OF EX-SERVICEMEN WELFARE

(a) whether the Government is planning to restructure the system of disbursing disability pension to ex-service personnel in the country;

(b) if so, the details thereof including the salient features of the new system;

(c) whether the Seventh Pay Commission has set forth any recommendation in this regard; and

(d) if so, the details thereof and the response of the Government thereto?


(a) to (d): The 7th Central Pay Commission (CPC) recommended the following on disability pension:-

The Commission is of the considered view that the regime implemented post 6th CPC needs to be discontinued, and recommended a return to the slab based system. The slab rates for disability element for 100 percent disability would be as follows:

The above recommendation had been accepted and Resolution dated 30.09.2016 issued accordingly.

The 6th CPC dispensation of the calculation of disability element on percentage basis, however, continued for civil side which resulted in an anomalous situation. The issue was accordingly referred to the Anomaly Committee. The Anomaly Committee recommended that parity with civilians for grant of disability element which was granted to the Defence Forces Personnel under 6th CPC may be maintained which has been approved by the Cabinet. Government orders in this regard are under process.
******* 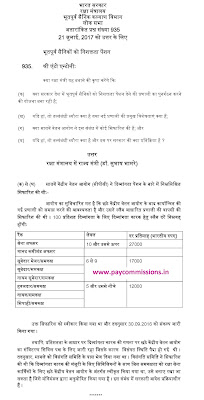