No. 161/KSB/Policy/SPL PEN/C
Government of India
Ministry of Defence
Department of Ex-Servicemen Welfare

Subject: Enhancement in the rate of Special Pension to Blinded Ex-servicemen under AO 606/75.

In supersession of Government of India, Ministry of Defence letter No. 12-SB(8)/52-2001/958/D(Res) dated 16th Nov.2001, I am directed to convey the sanction of the President to enhance the Special Pension to blinded Ex-Servicemen from Rs. 500/- p.m. to Rs. 4000/-per month with effect from June, 2017. The expenditure will be debited to relevant Head of account of Defence Services Estimates.

Sd/-
(A. K. Pandey)
Under Secretary to the Government of India 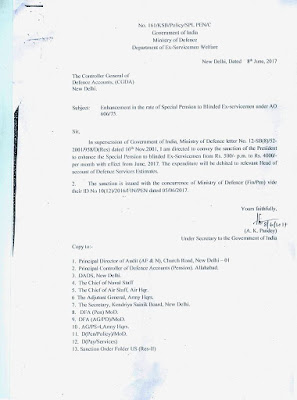