Pay Commissions CASUAL WORKERS, CONTRACT LABOUR, LOK SABHA QUESTIONS, WELFARE FACILITIES
Equal Pay for Equal Work should be implemented and No disparity in the salary of regular and casual workers 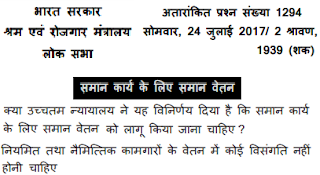 GOVERNMENT OF INDIA
MINISTRY OF LABOUR AND EMPLOYMENT

Will the Minister of LABOUR AND EMPLOYMENT be pleased to state:

(a)whether the Hon‟ble Supreme Court has given a ruling that the theory of equal pay for equal work should be implemented and if so, the details thereof;

(b)whether the Hon‟ble Court has also reiterated that there should be no disparity in the salary of regular and casual workers in a welfare State if both are doing same nature of work and if so, the details thereof;

(c)whether the Government is aware that the contract workers are being deprived from equal pay for equal work by their employers and if so, the details thereof;

(d)whether the Government has set up/proposes to set up a suitable redressal mechanism in this regard and if so, the details thereof; and

(e)the other measures taken/proposed to be taken by the Government for the welfare and social security of workers including casual/contract workers in the country?

“whether temporarily engaged employees (daily-wage employees, adappointees, employees appointed on casual basis, contractual employees and the like), are entitled to minimum of the regular pay-scale, alongwith dearness allowance (as revised from time to time) on account of their performing the same duties, which are discharged by those engaged on regular basis, against sanctioned posts”.

The Hon‟ble Supreme Court held that:

“There can be no doubt, that the principle of „equal pay for equal work‟ would be applicable to all the concerned temporary employees, so as to vest in them the right to claim wages, at par with the minimum of the payscale of regularly engaged Government employees, holding the same post”

(e): In order to provide social security benefits to the workers in the organised sector, the Government has enacted the Employees‟ Provident Funds and Miscellaneous Provisions Act, 1952 and Employees‟ State Insurance Act, 1948.

For providing social security benefits to the workers in the unorganised sector, the Government has enacted the Unorganised Workers‟ Social Security Act, 2008 which stipulates formulation of suitable welfare schemes for unorganised workers on matters relating to: (i) life and disability cover, (ii) health and maternity benefits, (iii) old age protection and (iv) any other benefit as may be determined by the Central Government through the National Social Security Board. Various Schemes, formulated by the Government to provide social security cover to the unorganized workers as listed in Schedule I of the above Act.