Subject:- Extension of CGHS facilities to the pensioners of Post and Telegraph Department

2. The retired employees of Post and Telegraph Department shall hereinafter, be entitled to the CGHS facility, irrespective of whether they were members of CGHS prior to retirement or not, subject to the payment of prevalent subscription for availing themselves of this facility as per rules as in the case of other Central Government Pensioners.

3. This issues with the approval of the Competent Authority.
Sd/-
(Sunil Kumar Gupta)
Under Secretary to Government of India 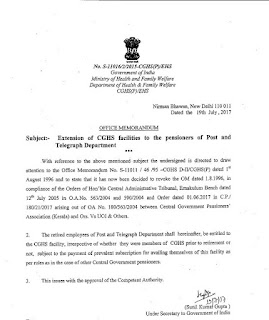