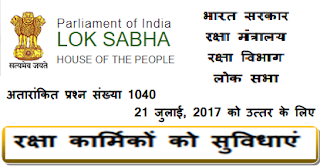 GOVERNMENT OF INDIA
MINISTRY OF DEFENCE
DEPARTMENT OF DEFENCE

(a) whether the Government proposes to provide more facilities to the defence personnel working in the border areas especially difficult and high altitude areas;

(b) if so, the details thereof along with the steps taken by the Government to improve living standard of soldiers by providing them high quality food, modern equipment, bed, protective gear etc.;

(c) whether it has come to the notice of the Government that military personnel were found dead after their disclosure regarding the difficulties faced by them;

(d) if so, whether the Government has conducted enquiry regarding those incidents, if so, the details thereof and if not, the reasons therefor; and

(e) whether the Government has conducted study regarding the lack of facilities of military personnel working in the said areas, if so, the details thereof and if not, the reasons therefor?


(a) to (e): Improvement in provision of facilities to defence personnel in the border areas is a continuous process and is being attended to on a regular basis.

It is ensured that all soldiers are provided facilities as per their entitlements. Further, improvement in variety and quality of rations is based on the feedback from troops and advice of scientific bodies. Contract for acquisition of state of art equipment has also been concluded.

Whenever a case relating to quality issues is reported with aspects to supplies, adequate procedures are in place for taking suitable action.

One case of a soldier taking the extreme step of taking his own life has been reported. An internal inquiry to ascertain the circumstances has been conducted. The matter is subjudice and police investigation is in progress.
******