On Wednesday, Samajwadi Party Member of Parliament in the Rajya Sabha, Naresh Agarwal demanded a hike in salaries of Members of Parliament, adding that MPs earn less than their secretaries.

News18 quoted Agarwal as saying, "Please include us in the Seventh Pay Commission. Our salaries are lesser than our secretaries.It looks like we are begging for money. We want an answer from the government. If they want to deny then they can. We want our salaries to be Rs 1,000 more than cabinet secretary."

Interestingly, while commotion generally rules both Houses of the Parliament, there is an uncharacteristic unity seen between the Opposition and the ruling party when it comes to deciding on a pay hike.

It was Agarwal who had brought the issue of pay hike last year after a Yogi Adityanath-led parliamentary panel suggested a 100 percent pay hike.

The panel recommended that the salaries of the MPs be raised from Rs 50,000 to Rs one lakh. The panel also suggested the Parliament to double the amount in constituency fund from Rs 45,000 to Rs 90,000 and a 75 percent rise in pensions, NDTV reported.

Ironically, Agarwal added that MPs deserve the hike given the good conduct of politicians in Parliament.While the Centre has given its approval for the hike in salaries, a formal bill is yet to be tabled in the Parliament to give effect to the recommendations.

The last official rise in the salary took place in 2010, when the Parliament passed a bill to raise the monthly salaries of MPs from Rs 16,000 to Rs 50,000. Back then, there was a huge hue and cry over the MPs gifting themselves a three-fold pay hike.

It also sought to enhance pension of former members from Rs 8,000 to Rs 20,000 with effect from the constitution of the present Lok Sabha on 18 May last year.

However, some of the MPs were not happy with the hike too. MPs like Mulayam Singh Yadav and Lalu Prasad Yadav had demanded at least a five-fold rise in the salaries.

In 2006, the Union Cabinet approved the Parliament's demand for a pay hike. As a result ,the salaries of MPs rose from Rs 12,000 to Rs 16,000 — a steep rise of 33 percent. The constituency fund was also doubled the constituency fund, from Rs 10,000 to Rs 20,000. Perhaps, for the first time in India's parliamentary history, the 2006 committee demanded a provision for mobile phones.

In 2001, the ruling NDA government amended the Salary, Allowance and Pension of Members of Parliament Act, 1954 — the law regulates the official salaries of parliamentarians — to raise the pay of members of the 13th Lok Sabha from Rs 4,000 to Rs 12,000, which was a 300 percent rise from the last hike in 1998. The constituency fund was also pegged at Rs 10,000.

However, it is not just the parliamentarians who have been enjoying the hike in their salaries. 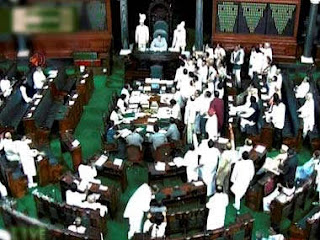 At a time, when Tamil Nadu is facing an agrarian crisis, the Tamil Nadu Assembly on Wednesday decided to give the state legislators an almost 100 percent pay hike. The monthly salaries of the 234 MLAs in the state Assembly was doubled from Rs 55,000 to Rs 1,05,000. The monthly pensions of the legislators were hiked to Rs 20,000.

The Assembly also increased the phone bill allowance from Rs 5,000 to Rs 7,000. The report added that there was a Rs 50 lakh addition to the MLA constituency fund, which now stood at Rs Rs 2.5 crores.

The state government had last hiked the salaries of the MLAs in 2011, when the AIADMK government under J Jayalalithaa pegged the monthly salary at Rs 55,000. The constituency fund was also hiked from Rs Rs 5,000 to Rs 10,000.

The case was somewhat similar in distant Maharashtra, which has been reeling under agrarian crisis since many years now. However, that did not deter the MLAs and MLCs from hiking their salaries.

In 2016, the Maharashtra Assembly passed a bill to grant MLAs and MLCs a two-fold rise in salaries. Before 2016, a legislator and councillor earned Rs 75,000, as per the 2010 revision, when the salaries were hiked by 75 percent from Rs 29,000. But after the hike, their salaries rose to at least Rs 1,70 lakh. The move had come at a time when the state was facing a Rs 3.5 lakh crore burden of debt.