Off late, it has come to notice that despite passing of Bills for Final withdrawal/Final Settlement of GP Fund Accounts in respect of Non-DAD Officers well in advance, on priority basis and crediting the passed amount to Public Fund Account of respective GM/Controller by Bank Authority on due date, the said amount could not be disbursed to the concerned officer, in time, at your end due to late receipt/non-receipt of Cheque Slips, which has caused grievances from the officers.

To redress such grievances of the officers, henceforth following documents may please be obtained from the concerned officers and enclosed the same with their GPF Final withdrawal/settlement bills to enable this office to credit the passed amount to the officers personal Bank account directly instead of Public Fund Account of GM/Controller.

iii) A leaf of cancelled Multi City Cheque of that Bank Account, mentioned in NEFT Mandate Form, where Bank Account No & Name of the Account holder are printed.

It is, therefore, requested to ensure that the above documents have been enclosed with the GP Fund Final Withdrawal/Settlement Claims in respect of all the officers of your office, before forwarding the same to this office through your respective Local Accounts Office. 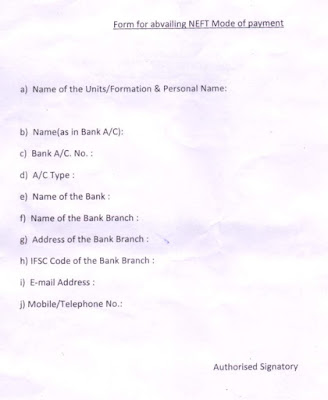