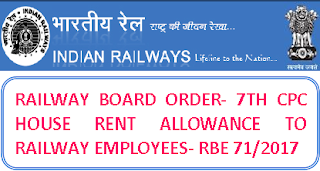 
Sub.:- Decision of the Government on the recommendations of the Seventh Central Pay Commission relating to grant of House Rent Allowance (HRA) to Railway employees.
+++++

4. The term “basic pay” in the revised pay structure means the pay drawn in the prescribed pay levels in the Pay Matrix and does not include Non-Practising Allowance (NP A) etc. or any other type of pay like special pay, etc.

5. In the case of running staff HRA will continue to be calculated on the basic pay plus 30% pay element till further orders.

8. All other conditions governing grant of HRA under existing orders shall continue to apply.

10. This issues with the concurrence of the Finance Directorate of the Ministry of Railways.