No. 4/1/2017-E.II(B)
Government of India
Ministry of Finance
Department of Expenditure


Consequent upon the decision taken by the Government on the recommendations of the Seventh Central Pay Commission, the President is pleased to decide that, Special Compensatory (Hill Area) Allowance stands abolished with effect from 1st July, 2017. This allowance was admissible to Central Government employees vide this Ministry’s O.M. No. 4(2)/2008-E.II(B) dated 29th August, 2008.

2. These orders shall also apply to the civilian employees paid from the Defence Services Estimates. In respect of Armed Forces personnel and Railway employees, separate orders will be issued by the Ministry of Defence and Ministry of Railways, respectively.

3. In so far as the employees working in the Indian Audit and Accounts Department are concerned, these orders are issued with the concurrence of the Comptroller and Auditor General of India. 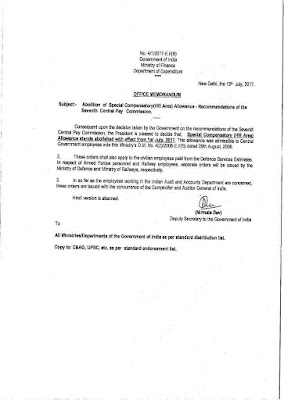