WELCOMED DECISION OF THE UNION CABINET FOR RESTORING RATES OF HRA AND 7TH CPC ALLOWANCES- SECRETARY, NCJCM STAFF SIDE


New Delhi: 29th June, 2017 – General Secretary, All India Railwaymen’s Federation and Secretary, Staff Side(JCM), Shri Shiva Gopal Mishra, welcomed decision of the Union Cabinet for restoring rates of House Rent Allowance @ 10%,20% and 30% to the Central Government Employees covered from levels 1 to 3, “however, demand of the Staff Side(JCM) for similar rate of HRA to other Group `C’ staff should also have been acceded to”, he added.

Shri Mishra applauded the decision of the Central Government for amending 50% DA barrier for increasing HRA @ 09%, 18% and 27% when DA exceeds 25% as also @ 10%, 20% and 30% on Dearness Allowance exceeding 50%. He further added that, “similar principle could have been adopted on other allowances which are DA indexed”.

He appreciated the government for increasing the rate of Fixed Medical Allowance from Rs.500 p.m. to Rs.1000 p.m.

Shri Mishra further said that, Staff Side(JCM) is thankful to the government for increasing various allowances for Nursing Staff and extending Patient Care Allowance to Ministerial Staff working in the hospitals, and at the same time hopeful for increasing the same for other categories of staff also. 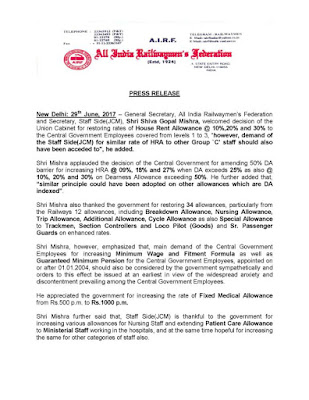