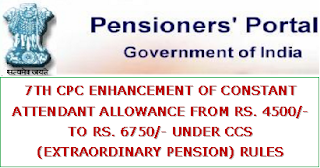 Subject: Implementation of Government's decision on the recommendation of the VIIth Pay Commission on CCS (Extraordinary Pension) Rules, 1939 — Enhancement of Constant Attendant Allowance.

2. Consequent upon the decision taken by the Government on the recommendations of the 7th Central Pay Commission on Allowances, Government has accepted the recommendation of 7th Central Pay Commission to increase the Constant Attendant Allowance by a factor 1.5, ie. to Rs.6750/- per month. Accordingly, sanction of the President is hereby conveyed for enhancement of the amount of Constant Attendant Allowance from the existing Rs.4500/- to Rs.6750/- per month.

4 In so far as persons belonging to Indian Audit and Accounts Department, these orders issue after consultation with the Comptroller & Auditor General of India. 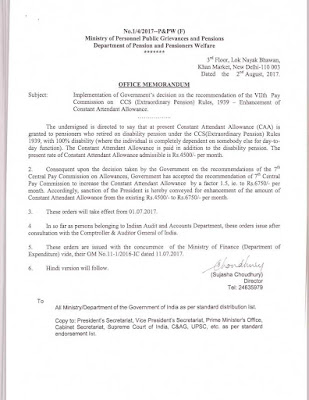