Sub: Submission of e-Revision Authorities through the e-Revision utility by the PAOs reg.

2. However, pension of pre-2016 cases needs to be revised by concerned PAOs as per OM No 38/37/2016-P&PW(A) dated 12th May, 2017. For these revision cases, CPAO has developed an e-Revision utility for sending the revision cases to CPAO. It has been noticed that some Ministries/Departments are sending on-line digitally signed revision authorities and also sending the same authorities manually to CPAO.

This issues with the approval of tle competent authority. 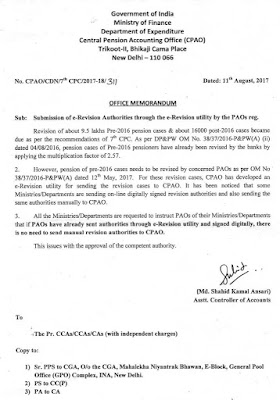