AADHAAR NUMBER REQUIRED FOR REGISTRATION OF DEATH OF AN INDIVIDUAL W.E.F. 01ST OCTOBER, 2017

Requirement of Aadhaar number for Registration of Death of an Individual.

The RGI has further directed concerned Department in the respective State/UT responsible for registration of birth and death to ensure compliance by concerned registration authorities and a confirmation to this effect by on or before 1st September 2017.

The above provisions shall come into effect immediately for residents of all States except J&K, Assam & Meghalaya for which a date will be notified separately. 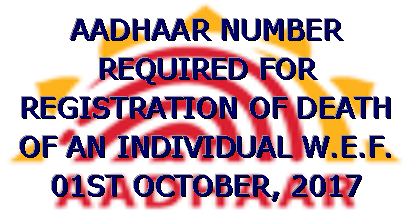 The RGI notification follows provisions of the Aadhaar Act and Regulations framed there under that have come into effect from 14th September 2016 and notifications to this effect have been published in the Official Gazette. Section 57 of the Aadhaar Act 2016 permits the use of Aadhaar number for establishing the identity of an individual for any purpose pursuant to any law or any contract to this effect.