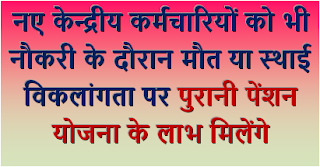 Tiene Mishra, Lucknow: Under the new Pension Scheme (NPS), the Central Government has fulfilled the long-standing demands of lakhs of central employees recruited since 2004. Now, in the case of his death or permanent disability, benefits will be given according to old pension scheme. In this case, the Ministry of Personnel and Pension of the Government of India has issued the order.

New government employees of central government and railways and other related ventures will also get benefits of old pension scheme on death or permanent disability during the job. The Railways and the Central Staff have long been expressing concerns about the future of their family on the untimely death of the employees of the NPS. The Central Government has accepted this demand of employees after the long struggle of organizations of Central employees, All India Railway Men's Federation and the JCM. Now, since January 1, 2004, the Central employees who are in the service will get all the benefits of the Old Pension Scheme on death and disability during the job. After issuing the order of this matter, the workers' organizations have taken the breath of relief.

The dependent will get full pension

No employee of NPS gets the benefit of pension, but if the employee dies during the service period, then his dependent will get pension according to the old pension scheme. In addition to 50 percent pension of basic pay, it will also be paid by 15 days full salary by calculating the remaining service period. Not only that, for the seven years of the death of the employee, he will get full pension like old employees.

Millions of employees will benefit

National General Secretary of All India Railway Men's Federation Shiv Gopal Mishra said that new employees were very worried about their future. The fight was going on since 2004. Now he has got success in getting all the benefits of his death or disability under the old pension scheme. With this, millions of new Central employees will receive substantial relief along with the Railways. 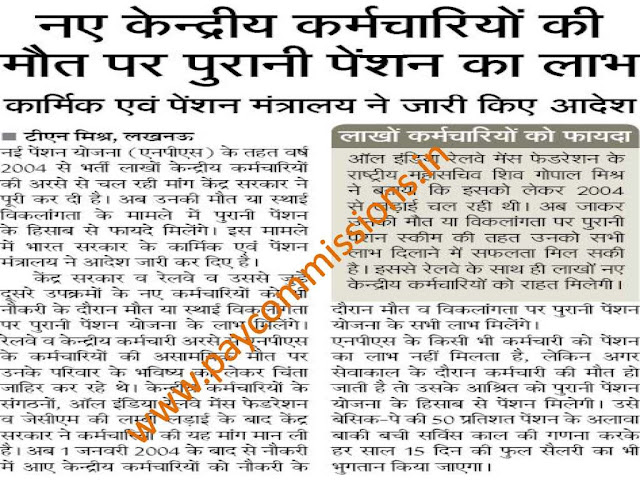