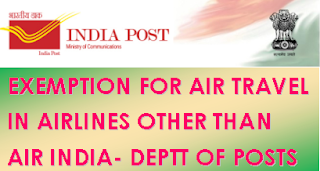 Subject : Exemption for travel in airlines other than Air India — reg.

While processing such proposals, it has been observed that in spite of repeated instructions issued by the Directorate vide letter no. 17-01/2015-PAP dated 28.07.2016, OM no. 9-1/2016-FA (Posts) dated 09.08.2016 and dated 28.02.2017 (Copies enclosed for ready reference), requests for seeking exemption are being submitted in the last days / hours of the proposed journey and that too with incomplete/insufficient reasons/documents in prescribed Performa (Revised) as required vide Directorate OM no. 9-1/2016-FA (Posts) dated 28.02.2017. This results in avoidable delay in processing such cases and higher expenditure due to the last minute booking of tickets. It is also seen that even without obtaining approval of the competent authority, the journey by airlines other than Air India is performed and at a later stage requests seeking ex-post facto approval are submitted, violating the instructions on the subject.

In view of the above, it is once again reiterated that the requests in the revised Performa complete in all respect are submitted to JS&FA at least 7 working days in advance from date of travel so that adequate time is made available for processing in Integrated Finance Wing. It may also be noted that non-receipt of approval by the stipulated date does not entitle one to claim relaxation as a matter of right.

This issue with the of Competent Authority. 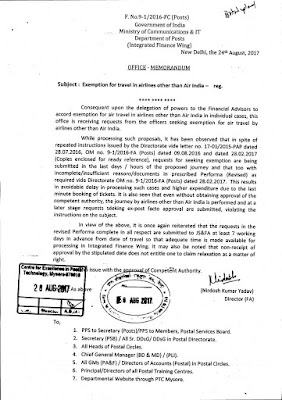