All Budgetary Authorities,
Under Central Board of Excise and Customs

References are being received from many field formations regarding deployment of "Staff Cars" to eligible/entitled officersi.ethe officers at the level of Commissioner & above and drawing Grade Pay of Rs. 10,000/-(Pre-revised) and above for commuting between office and residence.

2. It is to clarify that all Heads of the Department (HoD)have full financial and administrative powers to hire the "Staff Cars" for eligible/entitled officers (level of Commissioner & above) as per GFR,2017 subject to following terms and conditions:-

i. The Head of the Department may hire the Staff Car for entitled officers as and when the entitled officer joins the formation, provided the officer does not opt for transport allowance.

ii. The Staff Car may be hired as per the Cost Ceiling (if any prescribed) & Kilometers' Ceiling (2500 Km/Month) or as per any other instructions issued in this context.

iii. Hiring of staff cars shall be discontinued as soon as the entitled officer is transferred out from the formation and the post falls vacant. No staff car shall be hired against the additional charge(s), if at the same station. However the "Staff Cars" may be hired if the officer entitled for staff car holds additional charges(s) at another station or as and when the post is filled up again, once the new officer joins duty.

iv. The Staff Car may be hired only after the officer joins the duties and the vehicles attached with their previous posting are discontinued.

v. The information in respect of all Hired Vehicles may be submitted to EMC, DGHRD as per the "Annual Vehicle Report" prescribed. 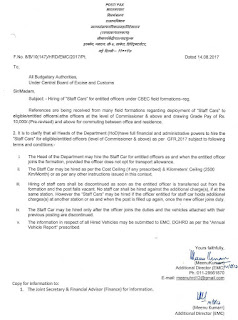