INCREASE IN SALARY OF MEDICAL , DENTAL AND SPECIALIST OFFICERS ENGAGED ON CONTRACT BASIS IN ECHS

I am directed to convey the sanction of the Competent authority to the following amendments in Para 2 of GoI letter No. 22d(50)/2007/US(WE)/D(Res) dated 27th Nov 2015 as amended vide Ministry of Defence letter No. 22D(50)/2007/US(WE)/d(Res) dated 06.042016 regarding contractual remuneration of employees engaged on contract basis in ECHS.

3. The revised order will be effective from the date of issue of this letter.

Sd/-
(A.K. Karn)
Under Secretary to the Govt. of India 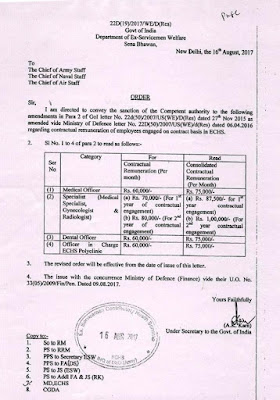