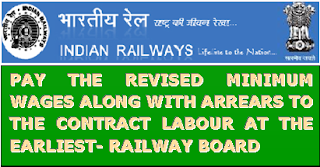 2. The matter has been considered in Board's office. The payment of revised minimum rates of wages to be paid by the contractors to the contract labourers is a statutory obligation. Therefore, this obligation cannot be circumvented.

3. Moreover, before notifying the change in Minimum Wage Rates, Ministry of Labour had invited objections. In this connection, attention is drawn to following extract of Gazette Notification S.O. 186(E) dated 19.01.2017 which is reproduced below:

"Whereas the draft proposal to revise the minimum rates of wages per day payable to the Schedule mentioned categories of employees engaged in the employment of Agriculture was published in the Gazette of India. Extraordinary, Part II, Section 3, Sub-section (ii), as required by clause (b) of sub-section (1) of section 5 of the Minimum Wages Act, 1948 (11 of 1948), vide notification number S.O. 2832(E), dated the 1st September, 2016 of the Government of India in the Ministry of Labour and Employment for information and inviting objections and suggestions from all persons likely to be affected thereby, till the expiry of the period of two months from the date on which the copies of the Gazette of India containing the said notification were made available to the public:

AND whereas the copies of the said Gazette were made available to the public on the 2nd September, 2016.

AND whereas objections and suggestions received on the said proposal have been considered by the Central Government."

SEC Railway has not raised any objection on 2nd Sept. 2016 or thereafter.

5. Attention is also drawn to provisions contained in "General Conditions of Contract" wherein the contractors are required to comply with the provisions of Contract Labour (R & A) Act, 1970 and Contract Labour (R & A) Rules, 1971, as modified from time to time, wherever applicable & are required to indemnify the Railway from and against any claim under aforesaid Act/Rules.

6. It is reiterated that Railways being Principal Employer are required to ensure that contractors should comply with the relevant provisions of labour laws pertaining to Contract Labour & Minimum Wages.

7. Thus, SEC Railway are advised to direct the contractors to pay the revised minimum wages along with arrears to the contract labour at the earliest under intimation to Board's office. 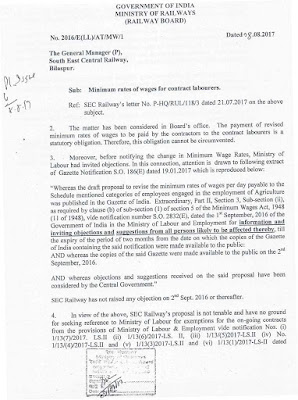 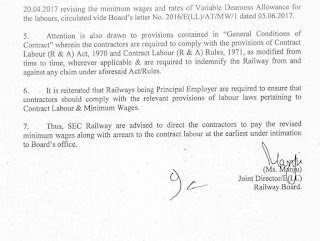