PAY REVISION OF BOARD LEVEL AND BELOW LEVEL EXECUTIVES AND NON-UNIONISED SUPERVISORS OF CENTRAL PUBLIC SECTOR ENTERPRISES (CPSES) W.E.F. 01.01.2017 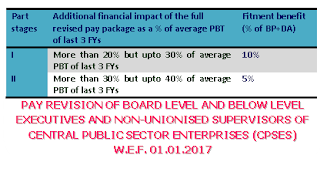 Subject:-Pay Revision of Board level and below Board level Executives and Non-Unionised Supervisors of Central Public Sector Enterprises (CPSEs) w.e.f. 01.01.2017.

The last revision of the scale of pay of Board level and below Board level Executives and Non-Unionized Supervisors of Central Public Sector Enterprises (CPSEs) was made effective from 01.01.2007 for a period of 10 years. As the next Pay Revision became due from 01.01.2017, the Government had set up the 3rd Pay Revision Committee (PRC) under the chairmanship of Justice Satish Chandra (Retd.) to recommend revision of pay and allowances for above categories of employees following IDA pattern of pay scales with effect from 01.01.2017. The Government, after due considerations of the recommendations of the 3rd PRC have decided as follows:

2. Revised Pay Scales: - The revised Pay scales for Board and below Board level executives would be as indicated in Annexure-I. There will be no change in the number and structure of pay scales and every executive has to be fitted into the corresponding new pay scale. In case of CPSEs which are yet to be categorized, the revised pay scales as applicable to the Schedule `D' CPSEs would be applicable.

3. Affordability: The revised pay scales would be implemented subject to the condition that the additional financial impact in the year of implementing the revised pay-package for Board level executives, Below Board level executives and Non-Unionized Supervisors should not be more than 20% of the average Profit Before Tax (PBT) of the last three financial years preceding the year of implementation.

(i) In case additional financial impact in the year of implementing the revised pay-package of a CPSE is within 20% of average PBT of last 3 years, a uniform full fitment benefit of 15% would be provided.


No fitment or any other benefit of pay revision will be implemented in the CPSEs where the additional financial impact of the revised pay package is more than 40% of the average PBT of last 3financial years.

(iii) At the time of implementation of pay revision, if the additional financial impact after allowing full / part fitment exceeds 20% of the average PBT of last 3 years, then PRP payout / allowances should be reduced so as to restrict impact of pay revision within 20%.

(iv) Subsequent to implementation of pay revision, the profitability of a CPSE would be reviewed after every 3 years and

b) if the profitability of a CPSE falls in such a way that the earlier pay revision now entails impact of more than 20% of average PBT of last 3 year, then PRP/ allowances will have to be reduced to bring down impact

3. Methodology for pay fixation: To arrive at the revised Basic Pay as on 1.1.2017 fitment methodology shall be as under: 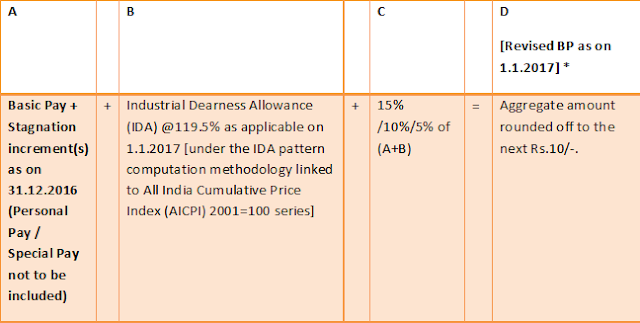 5. The applicability of affordability clause in respect of certain types of CPSEs is given at Annexure II

6. Increment:- A uniform rate of 3% of BP will be applicable for both annual increment as well as promotion increment. The details regarding Stagnation Increment and Bunching of pay are given at Annexure-III (A)

8. House Rent Allowance (HRA)/ Lease Accommodation and House Rent Recovery (HRR): Separate guidelines would be issued later on these allowances. Till then, the existing allowance at the existing rate may be continued to be paid at pre-revised pay scales.

9 Perks & Allowances: The Board of Directors of CPSEs are empowered to decide on the perks and allowance admissible to the different categories of the executives, under the concept of 'Cafeteria Approach', subject to a ceiling of 35% of BP. Under the concept of 'Cafeteria Approach' the executives are allowed to choose from a set of perks and allowances. The recurring cost incurred on running and maintaining of infrastructure facilities like hospitals, colleges, schools etc. would be outside the ceiling of 35% of BP. As regards company owned accommodation provided to executives, CPSEs would be allowed to bear the Income Tax liability on the 'non-monetary perquisite' of which 50% shall be loaded within the ceiling of 35% of BP on perks and allowances.

10. Certain other perks & Allowances: Separate guidelines would be issued on location based Compensatory Allowance, Work based Hardship Duty Allowances and Non-Practicing Allowance. Till then the existing allowances at the existing rate would continue to be paid at the pre-revised pay scales.

11. Performance Related Pay (PRP):- The admissibility, quantum and procedure for determination of PRP has been given in Annexure- IV. The PRP model will be effective from FY 2017-18 and onwards. For the FY 2017-18, the incremental profit will be based on previous FY 2016-17. The PRP model will be applicable only to those CPSEs which sign Memorandum of Understanding (MOU), and have a Remuneration Committee (headed by an Independent Director) in place to decide on the payment of PRP within the prescribed limits and guidelines.

12. Superannuation Benefits: The existing provisions regarding superannuation benefits have been retained as per which CPSEs can contribute upto 30% of BP plus DA towards Provident Fund (PF), Gratuity, Post-Superannuation Medical Benefits (PRMB) and Pension of their employees.

12.2 The existing requirement of superannuation and of minimum of 15 years of service in the CPSE has been dispensed with for the pension.

12.3 The existing Post-Retirement Medical Benefits will continue to be linked to requirement of superannuation and minimum of 15 years of continuous service for other than Board level Executives. The Post-Retirement medical benefits shall be allowed to Board level executives (without any linkage to provision of 15 years of service) upon completion of their tenure or upon attaining the age of retirement, whichever is earlier

13 Corpus for medical benefits for retirees of CPSEs: The corpus for post —retirement medical benefits and other emergency needs for the employees of CPSEs who have retired prior to 01.01.2007 would be created by contributing the existing ceiling of 1.5% of PBT. The formulation of suitable scheme in this regard by CPSEs has to be ensured by the administrative Ministries/Departments.

14. Club Membership: The CPSEs will be allowed to provide Board level executives with the Corporate Club membership (upto maximum of two clubs), co-terminus with their tenure.

15. Leave regulations/management: CPSEs would be allowed to frame their own leave management policies and the same can be decided based on CPSEs operational and administrative requirements subject to the principles that:

b. CPSEs should adopt 30 day's month for the purpose of calculating leave encashment.

c. Casual and Restricted Leave will continue to be lapsed at the end of the calendar year.

16. Periodicity: The next pay revision would take place in line with the periodicity as decided for Central Government employees but not later than 10 years.

17. Financial Implications: Expenditure on account of pay revision is to be entirely borne by the CPSEs out of their earnings and no budgetary support will be provided by the Government.

19. Issue of instructions/clarification and provision of Anomalies Committee: The Department of Public Enterprises (DPE) will issue necessary instructions/clarifications wherever required, for implementation of the above decisions. An Anomalies Committee consisting of Secretaries of Department of Public Enterprises (DPE), Department of Expenditure and Department of Personnel & Training is being constituted for a period of two years to look into further specific issues/problems that may arise in implementation of the Government's Decision on 3rd pay revision. Any anomaly should be forwarded with the approval of Board of Directors to the administrative Ministry/Department who will examine the same and dispose of the same. However, if it is not possible for the administrative Ministry/Department to sort out the issue, they may refer the matter to DPE, with their views for consideration of the Anomalies Committee.