The Government had constituted a committee comprising two members viz. Lt. Gen. (Retd.) G.S. Katoch and Lt. Gen. (Retd.) A.K. Ahuja to examine and give their recommendations on the changes in promotion policy and the Quantified System of Selection (QSS) for officers of Indian Army. The terms of reference of the committee were as below:-

• To study and recommend appropriate amendments in the Quantified System of Selection (QSS) in order to infuse more objectivity, transparency and fairness in the system.

• To study and recommend the changes required in the Promotion policy presently followed in the Army. This will cover aspects like method for calculation of vacancies, Cut-off CRs required, Consideration of Special Review / Withdrawn and Deferred cases, Zone of consideration, Notional Empanelment etc. 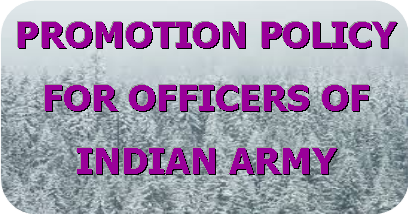 • To suggest the Model Calendar of Selection Boards.

The committee has already submitted its report.

Bringing Transparency in promotion policy is a continuous process and all necessary steps are taken from time to time.

This information was given by Minister of State for Defence Dr Subhash Bhamre in a written reply to Shri Asaduddin Owaisi in Lok Sabha today.