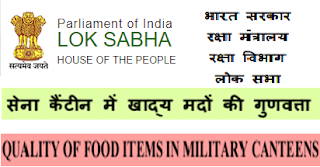 GOVERNMENT OF INDIA
MINISTRY OF DEFENCE
DEPARTMENT OF DEFENCE

(a) whether the Government is aware of the report that almost half of food items sold in the armed forces canteen department are sub-standard and a large percentage of food items are not tested and some items are supplied past their expiry dates;

(b) if so, the details thereof;

(c) whether the Government has taken any steps to probe the issue, action initiated against the guilty and also to ensure quality and proper ration foods to the military personnel; and

(d) if so, the details thereof and if not, the reasons therefor?

(a) to (d): Comptroller and Auditor General (C&AG) in its report of 2016 has expressed the apprehension about the credibility of the Companies being introduced and quality of food products supplied by them due to lesser number of test labs available to CSD. In respect of supply of items beyond expiry dates, C&AG in its report has stated about non-indication of date of manufacturing in the indent-cum-invoice of Unit Run Canteens (URCs).

The food items introduced in CSD are checked for compliance of Food Safety and Standards Authority of India (FSSAI) and tested in enlisted labs. On receipt of complaint, testing of items is carried out and heavy penalty is imposed as per policy. Advisory has been issued to all URCs not to collect any perishable items having less than 50% shelf life.

In regard to the entitled ration supplied to Military Personnel, dry rations are checked at Central Food Laboratories (CFL) by scientific staff and approved by Defence Food Analysts. Fresh ration are checked by Officer Commanding (OC) on units issuing the entitled ration. In addition, Commanding Officer (CO) /OC of consumer unit is also entitled to check the rations and be assured of quality before receipt.
******