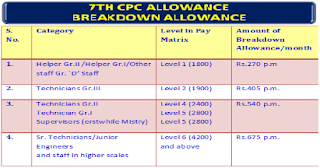 The General Managers/CAOs,
All Indian Railways and
Production Units etc.

Subject: Revision of the rates of Breakdown Allowance.

2. These orders take effect from 1st July, 2017. Other terms and conditions relating to Breakdown Allowance will remain the same.

3. In exercise of the powers conferred by the proviso to Article 309 of the Constitution, the President is pleased to direct that Rule 1420 of Indian Railway Establishment Code. Volume-II, 1987 edition (2005 reprint edition) may be amended as in the Advance Correction Slip No.61 enclosed herewith.

4. This has the sanction of the President and issues with the concurrence of the Finance Directorate of the Ministry of Railways.

(1) Non-gazetted Railway servants employed in Running sheds and Carriage and Wagon Depots who are earmarked for attending to breakdown duties and Relief Train Electrical staff, including Supervisory staff, holding posts upto Level 6 (Rs. 4200 GP) and above in the Pay Matrix (except the Supervisors in charge of Carriage & Wagon Depots, Loco Running Shed or the Electrical Relief Train), shall be allowed the following:-

(i) Breakdown Allowance at the following rates :-

(c) The rate of this allowance will be increased by 25% whenever the Dearness Allowance payable on the revised pay structure goes upto by 50%. 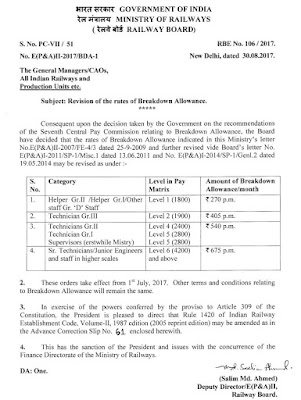 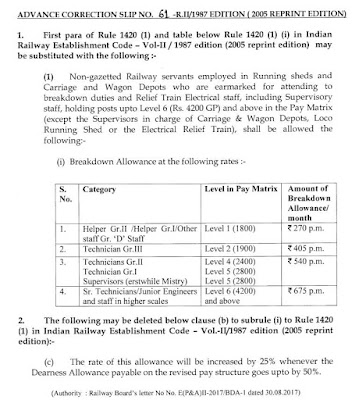