7TH CPC- DATE OF EFFECT OF ALLOWANCES-HRA, TRANSPORT ALLOWANCES, CEA ETC. MUST BE FROM 01.01.2016- AGENDA ITEM FOR NAC 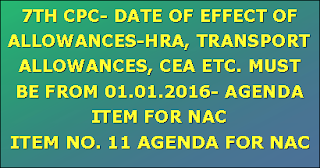 Salary package contains pay and allowances and cannot be bifurcated and treated separately. This issue had been the subject matter of the proceedings before the Board of Arbitration.

The staff side demands that the grant of above stated allowances must be from 1.1.2016 as in the case of Pay.
Read more
Facebook Twitter Google+ Pinterest Linkedin
SEVENTH PAY COMMISSION
By Pay Commissions