No. 1(2)/2016-D(Pen/Pol)
Government of India
Ministry of Defence
Department of Ex-Servicemen Welfare

The undersigned is directed to refer to this Ministry's letter No. 1(2)/2016-D(Pen/Pol) dated 30th September 2016 regarding de-linking of qualifying service of 33 years for revised pension, the following amendments are made-

Sd/-
(Manoj Sinha)
Under Secretary to the Government of India 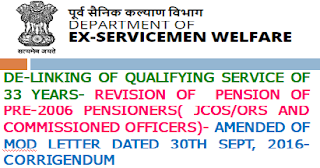