The General Managers/CAOs (R),
All Indian Railways & Production Units.
(As per mailing list).
Subject: Grant of ad-hoc bonus for 30 days to the Group 'C' & 'D' RPF/RPSF personnel for the financial year 2016-17.

The President is pleased to decide that all Group 'C' & 'D' RPF/RPSF personnel, may be granted ad-hoc bonus equivalent to 30 (thirty) days emoluments for the financial year 2016-17, without any wage eligibility ceiling. The calculation ceiling for payment of ad-hoc Bonus under these orders shall be monthly emoluments of Rs. 7000/-, as revised w.e.f 01.04.2014 vide Ministry of Finance (Department of Expenditure)'s OM No.7/4/2014/E.III(A), dt. 29th August, 2016.

2. The benefit will be admissible subject to the following terms and conditions:-

a) Only those Group 'C' & 'D' RPF/RPSF personnel who were in service on 31.3.2017 and have rendered at least six months of continuous service during the year 2016-2017 will be eligible for payment under these orders. Pro-rata payment will be admissible to the eligible personnel for period of continuous service during the year ranging from six months to a full year, the eligibility period being taken in terms of number of months of service (rounded to the nearest number of months).

c) All payments under these orders will be rounded off to the nearest rupee.

d) Various points regarding regulation of Ad-hoc/Non-PLB Bonus are given in the Annexure.

e) All the Group 'C' & 'D' RPF/RPSF personnel, regardless of whether they are in uniform or out of uniform and regardless of place of their posting, shall be eligible only for ad-hoc bonus in terms of these orders.

3. This issues with the concurrence of the Finance Directorate of the Ministry of Railways. 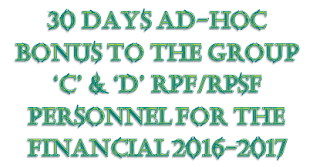