All Members of the Association
(Designated Officers)

Dearness Allowance for Workmen and Officer Employees in banks for the months of November December 2017 & January 2018 under X BPS/ Joint Note dated 25.5.2015

The confirmed All India Average Consumer Price Index Numbers for Industrial Workers (Base1960-100) for the quarter ended September 2017 are as follows:-

In terms of clause 7 of the 10th Bipartite Settlement dated 25.05.2015 and clause 3 of the Joint Note dated 25.05.2015, the rate of Dearness Allowance payable to workmen and officer employees for the months of Nov, Dec 2017 & January 2018 shall be 51.60 % of 'pay'. While arriving at dearness allowance payable, decimals from third place may please be ignored.

We advise banks to pay the difference between the old and revised salary and allowance to officers on an ad hoc basis, pending amendments to Officers' Service Regulations. 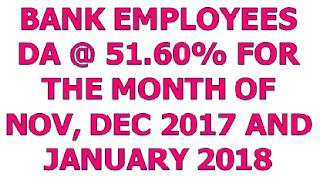