The General Manager (P),
All Indian Railways,
(As per standard mailing list).
Sub: Re-engagement of retired employees in exigencies of services.

Attention is invited to Railway Board's letter referred on the above subject on the issue of modalities of re-engagement of retired employees and remuneration to be paid to them.

2. These instructions have been reviewed and in supersession of the same, it has now been decided by the Board that retired employees may henceforth be engaged on the following conditions:

i. Divisional Railway Managers are empowered to re-engage retired employees.

ii. Railway should give publicity to such re-engagement, by putting it on Railway websites.

iii. Retired employees being re-engaged, should not have been covered under the Safety Related Retirement Scheme/ Liberalized Active Retirement Scheme for Guaranteed Employment for Safety Staff (LARSGESS).

iv. While re-engaging such staff, medical fitness of the appropriate category should be obtained from the designated authorities as per existing practices.

v. Suitability/competency of the staff should be adjudged before such re-engagement and the issue of their safety record as well as the safety and other operational requirements as needed are adequately addressed.

vi. Maximum age limit for which re-engagement shall continue will be 62.

ix. Re-engaged staff should be discharged immediately on joining of selected candidates from RRBs. 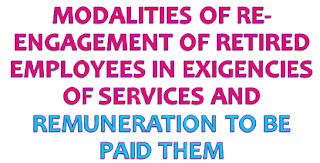