The Chief of the Army Staff

The Hon'ble Supreme Court in the following cases has decided:-

3. Accordingly, I am directed to convey the approval of Competent Authority in Ministry of Defence for implementation of orders of Hon'ble Courts/AFTs in pre-2006 retiree Havildars granted Hony rank of Nb Sub cases, by Service Hqrs. as under:-

b) In those Hony Nb Sub cases in which conditional sanctions have been issued by the Service Hqrs. with the approval of competent authority in MoD, Service Hqrs. may convert conditional sanction into absolute sanction at their level with the approval of competent authority at Service HQ. No interest shall be payable as per Hon'ble Supreme Court order dated 20.05.2015 in the case of UOI Vs Subhash Chander Soni.

4. The benefit regarding grant of pension of Naib Subedar to pre-2006 retired Havildars who were granted Honorary rank of Naib Subedar after their retirement, as ordered by the Courts/AFTs, would be applicable only in case of revision of pension as indicated in MoD order No 1(8)/2008-D(Pen/Policy) dated 12.06.2009 and not for retirement gratuity, encashment of leave, composite transfer grant etc.

5. The amount involved on account of implementation of Court/AFT orders will be booked under charged expenditure. 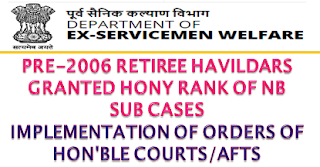