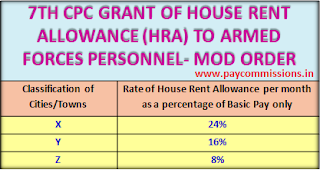 I am directed to say that consequent on the decisions of the Government on the recommendations of Seventh Central Pay Commission, the President is pleased to decide for grant of HRA to Armed Forces Personnel in partial modification of MoD letter No. 10(55)/98/D(Q&C) dated 18'11 November, 2008 as amended from time to time that the admissibility of HRA shall be as under:

2. The list of cities/towns classified as X,Y and Z vide Ministry of Finance, Dept. of Expenditure OM No. 2/5/2017-E.II(B) dated 7th July, 2017 for the purpose of grant of HRA is enclosed as Annexure to these orders.

5. The term "basic pay" in the revised pay structure means the pay drawn in the prescribed pay levels in the Pay Matrix and does not include Non-Practising Allowance (NPA), Military Service Pay (MSP) etc. or any other type of pay like special pay etc.

7. Other terms and conditions governing HRA to Armed Forces will remain unchanged.

8. The allowances relating to CILQ. FAA and SNLQ henceforth stand abolished as a separate allowance. Eligible employees to be governed by the newly proposed provisions for Housing for Personnel Below Officers Rank (PBORs).

9. The revised rates of the above allowances will be effected from 1st July, 2017. 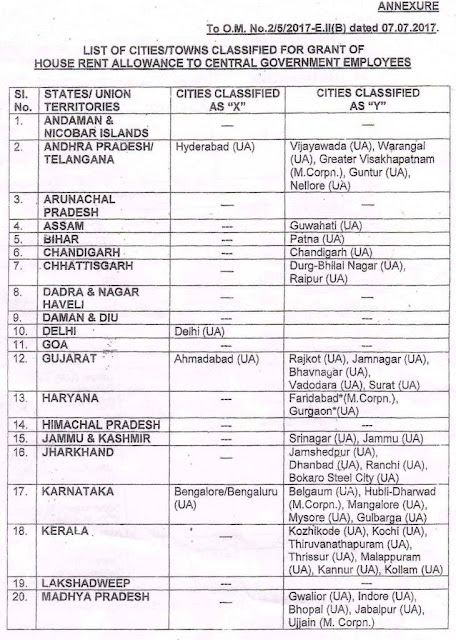 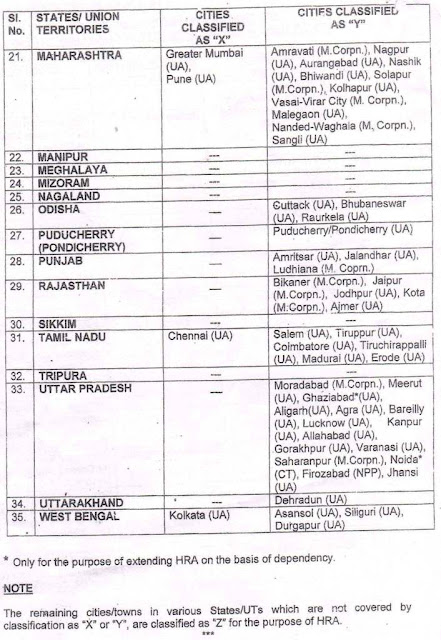