Pay Commissions APAR, PROMOTION, RAILWAY, RAILWAY BOARD, RAILWAY EMPLOYEES
Benchmarks for Promotion to Administration grades on Numerical Grading for the APARs prior to Year ending 2017- Clarification

Sub: Clarification on benchmarks for promotion to administration grades on numerical grading for the APARs prior to year ending 2017.

1.1 Also, benchmarks for promotion to various grades have been revised in terms of points vide Board's letter No.2017/SCC/3/09 dated 01.09.2017. However, APARs prior to the reporting period 2016-17 contain gradings such 'Outstanding', 'Very Good', 'Good', 'Average' & 'Below Average' and no numerical values have been assigned to these gradings.

2. To ensure homogeneity, it has been decided that gradings in APARs prior to 2016-17 may be assigned numerical values for empanelment/ promotion purposes etc. as under:


3. This disposes of Western Railway's letter referred above. 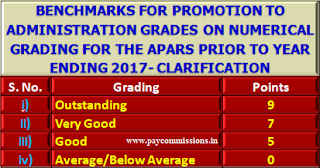