Sub: Revision of Pension of pre-2016 Pensioners/Family Pensioners pursuant to Government’s decision on the recommendations of 7th CPC — Concordance Tables for pension revision to the former Running Staff-reg.

Railway Board’s attention is invited to the instructions issued vide Board’s letter dated 11/07/2017 (RBE No. 66/2017) vide which DoP&PW’s orders together with Concordance tables for revision of Pension of pre-2016 Pensioners/Family Pensioners have been circulated. The Concordance Tables circulated by the Board, unfortunately do not cover the pension revision of former Running Staff as no separate tables in favour of them staff have been circulated so far. Reports received by the Federation (NFIR) reveal that the Pension/Family Pension of pre-2016 Running Staff is not being revised by the Zonal Railways due to non-provision of separate Concordance Tables by the Railway Board.

In this connection, NFIR desires to clarify that in case of former Running Staff Pension/Family Pension is required to be calculated taking into account the Basic Pay + 55% add on pay element. A sample calculation sheet of the Pension in the case of pre-2016 Running Staff is enclosed as Annexure to this letter for appreciation and quick action. 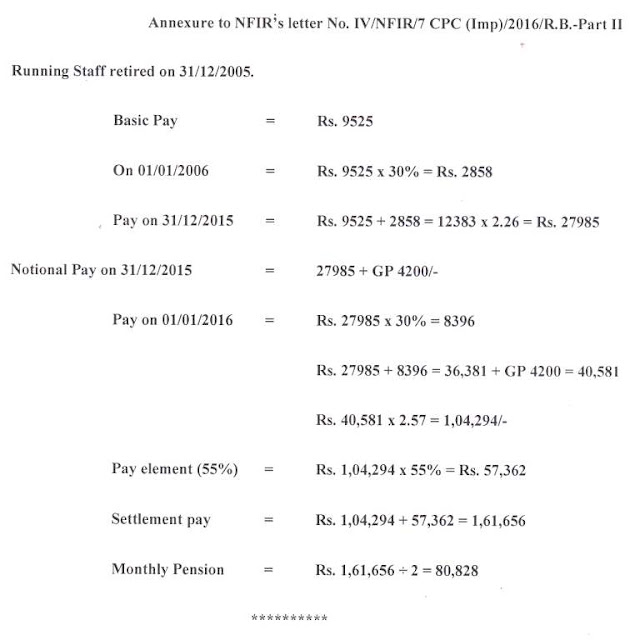