GDS committee report, containing favorable recommendations to the lll paid GDS employees was submitted to the Government in November 2016. A discussion on the report was held before the unions and the Department on March 2017. The officers of the postal services board had promised after discussion that the recommendations would be implemented within 6 months which was taken by the union. with gratitude. But though 17 months have elapsed, there is no move from the Department to implement the recommendations which we note painfully. We are not in a position to explain delay before the employee. VII th CPC report relating to about 1 crore central government employees and pensioners was implemented with the 8 months of the submission to the Government. There is no justification for the abnormal delay for the non implementation of GDS committee report, relating to 240000 GDS employees of the postal department alone.

In the above circumstances, we are constrained to move on serious agitation programmes against the attitude of the Government including non atteding of PLI/RPLI, and SB/RD business. Along with this, we are preparing for conductind nation wide strike in the month of May 2018. Statuary notice for the strike will be given in the appropriate time.

Thanking you.
Yours Sincerely, 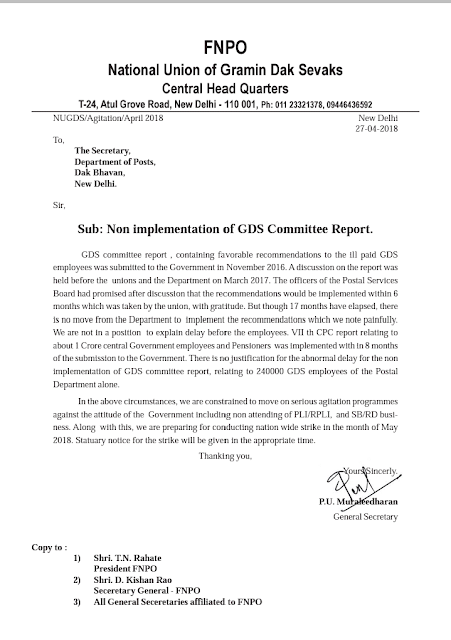