Pay Commissions ADVANCES, FAMILY PENSIONER, FIN MIN ORDER
Grant of Advance- Amendment to Rule 80 regarding Amount of Advances to the families of Govt Servants who die while in Service- Fin Min Order

Grant of Advance – Amendment to Rule 80 of Compendium of Rules on Advances to Government Servants, Dt. 20th June, 2018

Sub: Grant of Advance – Amendment to Rule 80 of Compendium of Rules on Advances to Government Servants.

The undersigned is directed to say that in pursuance of a reference received from the Department of Personnel & Training regarding the demand raised by the Staff Side in the National Council (JCM), the existing provisions of Compendium of Rules on Advances – Rule 80 – relating to Amount of Advances to the families of Government Servants who die while in Service, are retained and amended, as per attached annexure.

2. These orders will take effect from the date of issue of this Office Memorandum. The cases where the advances have already been sanctioned need not be reopened.

3. In so far as persons serving in Indian Audit and Accounts Department are concerned, these orders issue in consultation with the Comptroller and Auditor General of India.

4. All the Ministries/ Departments are requested to bring the amendments to the notice of all its attached and subordinate offices for their information.

Hindi version of this Office Memorandum is enclosed.

AMENDMENTS TO COMPENDIUM OF RULES ON ADVANCES TO
GOVERNMENT SERVANTS, 2005

Rule 80. Amount of Advance: The amount of an advance which may be granted under Rule 79 shall not exceed Rs.25,000 (Rupees Twenty Five Thousand only). 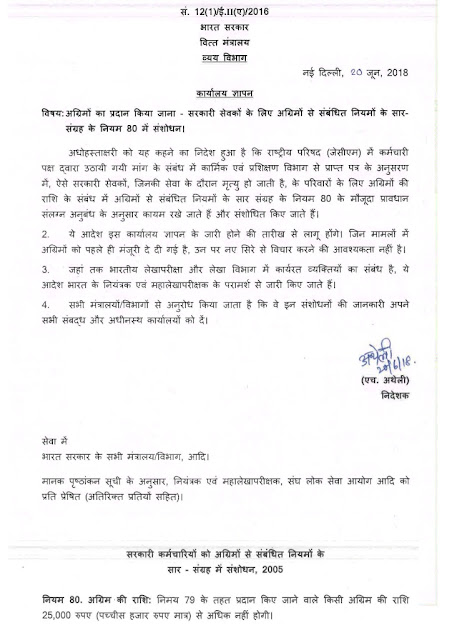