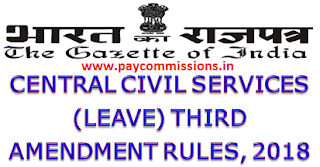 G.S.R. 554(E).—In exercise of the powers conferred by the proviso to article 309 read with clause (5) of article 148 of the Constitution and after consultation with the Comptroller and Auditor General of India in relation to the persons serving in the Indian Audit and Accounts Department, the President hereby makes the following rules further to amend the Central Civil Services (Leave) Rules, 1972, namely: -

1. (i) These rules may be called the Central Civil Services (Leave) Third Amendment Rules, 2018.

(ii) They shall come into force on the date of their publication in the Official Gazette.

(a) in sub-rule (2), in clause (b), for the words "a child below the age of twenty-two years", the words "an offspring of any age" shall be substituted.

(b) in sub-rule (3), after clause (ii), the following clause shall be inserted, namely:-

"(iii) Child care leave may not be granted for a period less than 5 days at a time.".