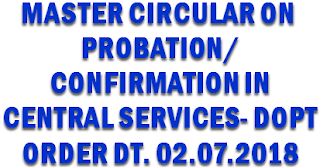 The undersigned is directed to refer to this Department’s OM No 28020/1/2010 dated 21.07.2014 on the above subject and to say that guidelines / instructions regarding Probation and Confirmation have been issued from time to time. It is now proposed to farther consolidate these instructions to provide clarity and ease of reference.

2, Below the Master Circular is finalised, it is furnish comments / views in this regard. if any by 16.07.2018 to the undersigned at the email address : jha.sn@nic.in

Sd/-
(Surya Narayan Jha)
Under Secretary to the Government of India

No. 28020/3/2018-Estt(C)
Government of India
Ministry of Personnel, PG and Pension
Department of Personnel & Training

The undersigned is directed to refer to this Department's O.M. No. No. 28020/3/2010-Estt(C) dated 21.07.2014 wherein consolidated instructions on Probation/Confirmation where issued.

It has been decided to further consolidate the instructions/guidelines in relation to probation and confirmation as a Master Circular to provide clarity and ease of reference. The Master Circular issued vide O.M. dated 21.7.2014 has been suitably updated as on date and the same is enclosed. The list of O.Ms. issued till date is at Appendix.

MASTER CIRCULAR ON PROBATION AND CONFIRMATION IN CENTRAL SERVICES

PROBATION
1. A person is appointed on probation in order to assess his suitability for absorption in the service to which he has been appointed. Probation should not, therefore, be treated as a mere formality. No formal declaration shall be necessary in respect of appointment on probation. The appointing authority may declare successful completion, extend the period of probation or terminate the services of a temporary employee on probation, on the basis of evaluation of performance.

2. Probation is prescribed when there is direct recruitment, promotion from one Group to another or for officers re-employed before the age of superannuation. The probation shall stand successfully completed on issue of orders in writing. It is, however, not desirable that a Government servant should be kept on probation for long periods.

3. Instead of treating probation as a formality, the existing powers to discharge probationers should be systematically and vigorously used so that the necessity of dispensing with the services of employees at later stages may arise only rarely.

4. Concentration of attention on the probationer’s ability to pass the probationary or the departmental examination, if applicable, is essential part of the qualification for confirmation but not the most important part. There should be a very careful assessment of the outlook, character and aptitude for the kind of work that has to be done in the service before a probationer is confirmed.

6. Save for exceptional reasons, probation should not be extended for more than a year and in no circumstance an employee should be kept on probation for more than double the normal period.

7. A probationer, who is not making satisfactory progress, should be informed of his shortcomings well before the expiry of the original probationary period so that he can make special efforts at self-improvement. This can be done by giving him a written warning to the effect that his general performance has not been such as to justify his confirmation and that, unless he showed substantial improvement within a specified period, the question of discharging him would have to be considered. Even though this is not required by the rules, discharge from the service being a server, final and irrevocable step, the probationer should be given an opportunity before taking the drastic step of discharge.

8. During the period of probation, or any extension thereof, candidates may be required by Government to undergo such courses of training and instructions and to pass examinations, and tests (including examination In Hindi) as Government may deem fit, as a condition to satisfactory completion of the probation.

MANDATORY INDUCTION TRAINING
9. In all cases of direct recruitment there should be a mandatory induction training of at lest two weeks duration. Successful completion of the training may be made a pre-requisite for completion of probation. The syllabus for the training may be prescribed by the Cadre authorities and the Training Division of DOPT can be consulted, if required. The recruitment rules for all posts, wherever such a provision does not already exist, may be amended to provide for such mandatory training. Till such time as the Recruitment Rules are amended, a clause on the above lines may be included in the offer of appointment.

PERIOD OF PROBATION
10. The period of probation is prescribed for different posts/services in Central Government on the following lines:

If a Government servant is appointed to another post by direct recruitment either in the same department or a different department, it may be necessary to consider him for confirmation in the new post in which he has been appointed by direct recruitment irrespective of the fact that the officer was holding the earlier post on a substantive basis. Further confirmation in the new entry grade becomes necessary because the new post may not be in the same line or discipline as the old post in which he has been confirmed and the fact that he was considered suitable for continuance in the old post (which was the basis for his confirmation in that post) would not automatically make him suitable for continuance in the new post the Job requirements of which may be quite different from those of the old post.

(i) Persons who are inducted into a new service through promotion shall also be placed on probation but there shall be no probation on promotion from one grade to another but within the same group of posts, except when the promotion involves a change in the Group of posts in the same service, e.g. promotion from Group ‘B’ to Group ‘A’ in which case the probation would be for the prescribed period.

(ii) If the recruitment rules do not prescribe any probation, an officer appointed on regular basis (after following the prescribed DPC procedure, etc.) will have all the benefits that a person confirmed in that grade would have.

There shall be no probation in the cases for appointment on contract basis, tenure basis, re-employment after superannuation and absorption.

LEAVE TO PROBATIONER, A PERSON ON PROBATION

12. The period of joining time availed of by a probationer on return from leave should be counted towards the prescribed period of probation if but for the leave, he would have continued to officiate in the post to which he was appointed.

13. If, for any reason, it is proposed to terminate the services of a probationer, any leave which may be granted to him shall not extend –

(i) Beyond the date on which the probation period as already sanctioned or extended expires, or

(ii) Beyond any earlier date on which his services are terminated by the orders of an authority competent to appoint him.

15. The Appointing Authority may, if it so thinks fit, extend the period of probation of a Government servant by a specified period but the total period of probation does not exceed double the normal period. In such cases, periodic reviews should be done and extension should not be done for a long period at one time.

18.The decision whether an employee should be confirmed or his probation extended should be taken soon after the expiry of the initial probationary period, that is within six to eight weeks, and communicated to the employee together with the reasons in case of extension. A probationer who is not making satisfactory progress or who shows himself to be inadequate for the service in any way should be informed of his shortcomings well before the expiry of the original probationary period so that he can make special efforts at self-improvement.

19. On the expiry of the period of probation, steps should be taken to obtain the assessment reports on the probationer to:-

i. Confirm the probationer/issue orders regarding satisfactory termination of probation, as the case may be, if the probation has been completed to the satisfaction of the competent authority; or

20. In order to ensure that delays do not occur in confirmation, timely action must be initiated in advance so that the time limit is adhered to.

21. If it appears to the Appointing Authority, at any time, during or at the end of the period of probation that a Government servant has not made sufficient use of his opportunities or is not making satisfactory progress, the Appointing Authority may revert him to the post held substantively by him immediately preceding his appointment, provided he holds a lien thereon or in other cases may discharge or terminate him from service.

22. A Probationer reverted or discharged from service during or at the end of the period of probation shall not be entitled to any compensation.

24. Confirmation will be made only once in the service of an official which will be in the entry grade post/service/cadre provided further confirmation shall be necessary when there is fresh entry subsequently in any other post/service/cadre by way of direct recruitment or otherwise. Confirmation is de linked from the availability of permanent vacancy in the grade. In other words, an officer who has successfully completed the probation, as prescribed under relevant rules, may be considered for confirmation. A specific order of confirmation will be issued when the case is cleared from all angels.

28. Where probation on promotion is prescribed, the appointing authority will on completion of the prescribed period of probation .assess the work and conduct of the officer himself and in case the conclusion is that the officer is fit to hold the higher grade, he will pass an order declaring that the person concerned has successfully completed the probation. if the appointing authority considers that the work of the officer has not been satisfactory or needs to be watched for some more. time he may revert him to the past / service/cadre from which he was promoted, or extend the period of probation. as the case may be.

29. Since there will be- no confirmation on promotion before an official is declared to have completed the probation satisfactorily, rigorous screening of his performance Should be made and there should be no hesitation to revert, a person to the post or grade from which he was promoted if the work of the officer during probation has not been satisfactory.

30. A Government servant appointed by transfer would duly have been confirmed in the earlier post. fir such a case further confirmation in the new post would not be necessary and he could be treated as permanent in the new post Where, however, a Government servant who has nut already been confirmed in the old post is appointed by transfer, if would be necessary to confirm him in the new post in such cases, he may be considered for confirmation after watching him for two years. Within that period of two years, the officer would earn two reports in the new grade and the DPC may consider his case for confirmation on the basic of these APARs.