Procedure to process cases to accord exemption for air travel in airlines other than Air India in individual cases, Dt. 20th August, 2018

Subject:- Procedure to process cases to accord exemption for air travel in airlines other than Air India in individual cases - Regarding.

Reference is invited to Department of Expenditure OM. No.19024/1/2009-E.IV dated 07.06.2016 on the subject cited above. In this context it is observed that a considerable number of cases in connection with travelling on official tour/LTC in private airlines (other than Air India) are being received for according post-facto approval. Availing the services of private airlines and subsequently seeking post-facto relaxation/approval is not a healthy practice.

2. With a view to avoid/the following procedure is prescribed for travelling on official tour/LTC:-

(a) Officers should prepare tour programme sufficiently in advance and tickets for Air India be booked.

(b) The guidelines issued by the Ministry of Finance for relaxation to travel by airlines other than Air India must be adhered to and request for relaxation be submitted at least seven (7) working days in advance from the date of travel.

(c) The tickets in either case should be booked either from the website of the Airlines or through the authorized agents nominated by the Ministry of Finance.

(d) Proposals for according post-facto approvals will not be entertained. However, in deserving cases, the proposal may be submitted with full justification for not obtaining prior approval.

3. The contents of this Circular may be brought to the notice of all concerned. 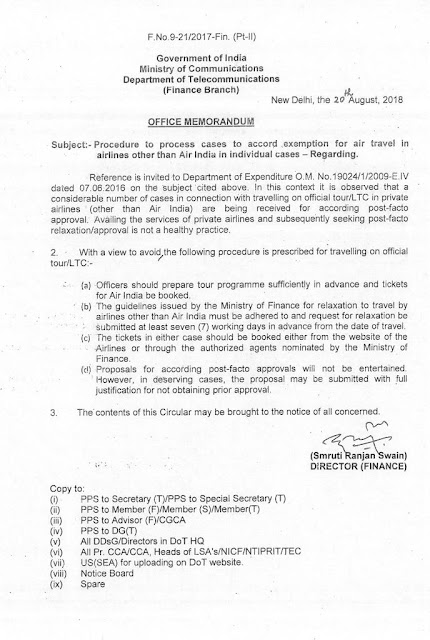