Subject : Clarification on modalities of transfer of the NPS contribution to casual labourer with temporary status to their GPF accounts.

The undersigned is directed to refer to this Department’s OM No. 51016/2/90-Estt (C) dated the 10th September, 1993 vide which a scheme for grant of temporary status to the casual employees was framed. The scheme applied to those casual labourers who were in employment on the date of the issue of the OM and had rendered one year of continuous service in Central Government offices, which meant that they must have been engaged for a period of at least 240 days (206 days in the case of offices observing 5 days week). The scheme did not apply to Departments of Telecom & Posts and Ministry of Railways.

3. As per para 8 of the scheme, two out of every three vacancies in Group ‘D’ cadres in respective offices where the casual labourers had been working was to be filled up as per extant recruitment rules and in accordance with the instructions issued by Department of Personnel and Training from amongst casual workers with temporary status. However, regular Group ‘D’ staff rendered surplus for any reason would have prior claim for absorption against existing/future vacancies.

4. Vide the G.M. No,49014/1/2004 -Estt (C) dated the 26th April, 2004, the above scheme was reviewed in the light of introduction of New Pension Scheme in respect of persons appointed to the Central Government service on or after 1.1.2004. These casual labourers with temporary status were now to be considered under the NPS and their underlying amount in GPF was credited to them.

5. The OM dated 26th April, 2004 was quashed by various benches of CAT/High Courts who had decided that the scheme could not be modified retrospectively.

6. The position was reviewed in the light of the Court Judgement in consultation with the Department of Expenditure. It was then decided vide this Department’s O.M. No, 49014/2/2014- Estt(C) dated 26.02.2016 and O.M. No. 49014/2/2014-Estt(C) dated 28.07.2016 that the casual labourers who had been granted temporary status under the scheme. and have completed 3 years of continuous service after that, were entitled to contribute to the General Provident Fund. It was also decided that 50% of the service rendered under temporary status would be counted for the purpose of retirement benefits in respect of those casual labourers who have been regularized in terms of pare 8 of the OM dated 10.09.1993, This was applicable to all casual labourers covered under the scheme of 1993 whether they were regularized before or after 31.12.2003.

7. It was emphasised that the benefit of temporary status is available only to those casual labourers who were in employment on the date of the issue of the OM dated 10th September, 1993 and were otherwise eligible for it. No grant of temporary status is permissible after that date. The employees erroneously granted temporary status between 10.09.1993 and the date of Hon’ble Supreme Court judgement in Union Of India Arid Anr vs Mohan Pal. 2002 (3) SCR 613. delivered on 29th April, 2002, will however be deemed to have been covered under the scheme of 10.09.93.

8. Subsequent to the issue of this Department’s O.M. No 49014/2/2014-Estt(C) dated 26.02.2016 and O.M. No. 49014/2/2014-Estt(C) dated 28.07.2016 several Ministries/ Departments were seeking clarifications as regards to the modalities of transfer of the amount lying in the NPS account to the GPF account of these casual labourers. The matter has been examined in consultation with DAD Pensions & Pensioners’ Welfare, D/o Financial Services and D/o Expenditure.

9. D/o Pension and Pensioners’ Welfare have clarified / stated that the employees’ share of the NPS subscription with interest should be withdrawn and deposited in the GPF accounts if these CL-TS regularized after 31.12.2003 and the Government share with interest accrued under NPS should be deposited in Government’s account.

(i) Adjustment of Employees contribution in Accounts:- Amount may he credited to individual’s GPF Account and the account may be recasted permitting up-to-date interest (Authority-FR-16 & Rule 11 of GPF Rules)

(ii) Adjustment of Government contribution under NPS in Accounts:- To be accounted for as (-) Dr. to object heads 70-Deduct Recoveries under major Head 2071- Pension and other Retirement benefit-Minor Head 911- Deduct Recoveries of overpayment (GAR 35 and Para 3.10 of List of Major and Minor Heads of Accounts’)

(iii) Adjustment of increased value of subscription on account of appreciation of investment – may be accounted for by crediting the amount to Govt. account under M.H.0071 – Contribution towards Pensions and other Retirement Benefits 800- Other Receipts (Note under the above Head in LMMH4).

11. The principle underlying the consideration of the case of CL(TS) is that Casual labourers who were covered under the scheme of 1993 and have been regularised in terms of the above scheme were entitled to GPF and Old Pension scheme even if they were regularised after 31.12.2003,

12. Furthermore, as per D/o Expenditure / CGA, if the benefits under old pension scheme are to be allowed to a retired employee, who had contributed towards NPS at any stage. the entire NPS accumulations i.e. employee’s contribution + Government’s matching contribution + appreciation thereon should be remitted into the accredited bank of the PAO concerned and the accounting procedure will be same in this case as prescribed at par 10 above.

13. All Ministries/Departments are requested to settle the matter as explained above. If any further clarification is needed in the matter, they should approach CGA (Controller General of Accounts) directly, since CGA is the accounting agency and is competent to clarify the matter. 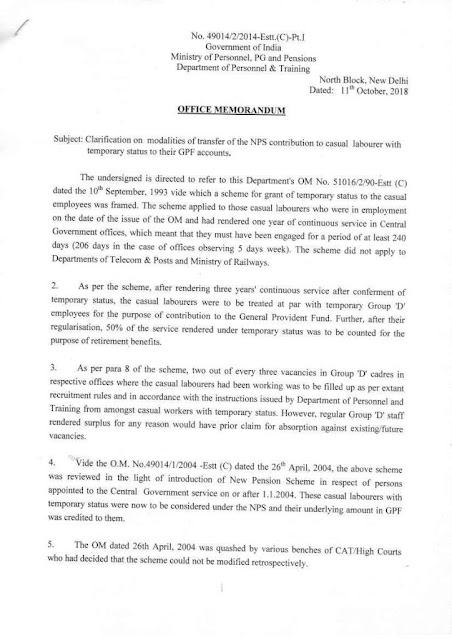 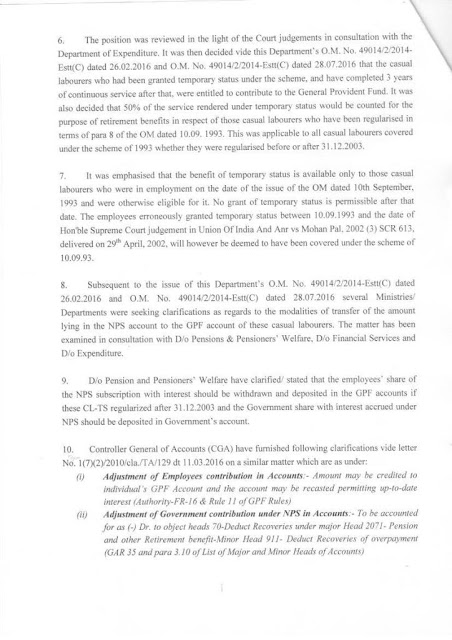 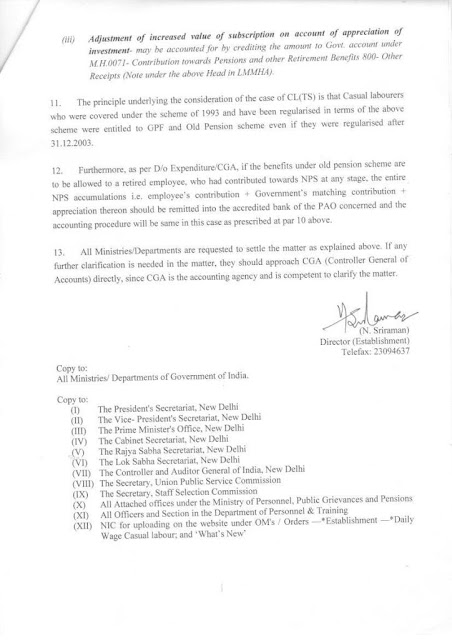