Sub: Regulation of LTC claims when portion of journey are performed by private transport - Regd.

This Directorate has sought clarification from the Nodal Ministry regarding reimbursement of LTC claims where a part of the journey (be it in the beginning, middle or end) has been performed by the Government servant by unauthorized mode of transport (private bus/private taxi etc.) and rest of the journey to the declared place of visit by authorized mode of transport.

(I) DOP&T’s OM no. 31011/3/2015-Estt. (A.IV) dated 09.02.2017 provides that cases where a Government servant travels on LTC upto the nearest airport/railway station/bus terminal by authorized mode of transport and undertakes rest of the journey to the declared place of visit by private transport/ own arrangement (such as personal vehicle or private taxi etc.), may be dealt with as follows:-

(a) In all such cases the Government servant may be required to submit a declaration that he and the members of the family in respect of whom the claim is submitted have indeed travelled upto the declared place of visit.

(b) If a public transport is available in a particular area, the Government servant will be reimbursed the fare admissible for journey by otherwise entitled mode of public transport from the nearest airport/railway station/bus terminal to the declared place of visit by shortest direct route.

(II) In view of the above provisions, a Government employee shall get fare reimbursement in cases where the initial or end part of the LTC journey from the source/destination to the nearest railhead/airport or vice-versa, as the case may be, has been performed by a private/personal mode of transport while the major part of the journey from the nearest railhead/airport has been performed by the authorized mode of transport.

3. Taking into account the advice of the Nodal Ministry in this regard, action may kindly be taken in similar cases only on the basis of the above advice and in any case of deviation from the above, the advice of the Directorate may be sought for. 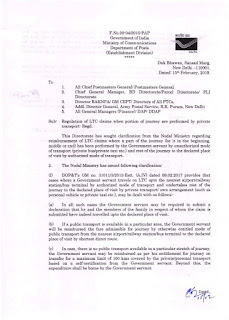 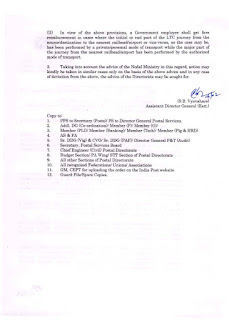