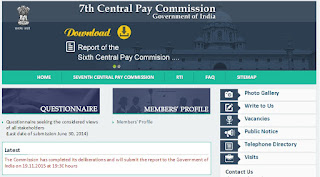 The Seventh Pay Commission has make latest updates as under:

The Commission has completed its deliberations and will submit the report to the Government of India on 19.11.2015 at 19:30 hours

The Commission is headquartered in Delhi and has been given 18 months from date of its constitution to make its recommendations. To this end the Commission will set up its team of Officers, Advisers, Institutional Consultants and Experts and call for required information and documents from Ministries and Departments of Government of India and various Service associations.