Separate paging is given to this Part in order that it may be filed as a separate compilation.

New Delhi, the 1st January, 2016/Pausha 11, 1937 (Saka)
The following Act of Parliament received the assent of the President on the 31st December, 2015, and is hereby published for general information:—

An Act further to amend the Payment of Bonus Act, 1965.

BE it enacted by Parliament in the Sixty-sixth Year of the Republic of India as follows:—

(i) for the words ‘‘three thousand and five hundred rupees’’ at both the places where they occur, the words ‘‘seven thousand rupees or the minimum wage for the scheduled employment, as fixed by the appropriate Government, whichever is higher’’ shall respectively be substituted;

(ii) the following Explanation shall be inserted at the end, namely:—

‘Explanation.—For the purposes of this section, the expression ‘‘scheduled employment’’ shall have the same meaning as assigned to it in clause (g) of section 2 of the Minimum Wages Act, 1948.’. [Amendment of section 12.]

4. In section 38 of the principal Act, for sub-section (1), the following sub-section shall be substituted, namely:—

‘‘(1) The Central Government may, subject to the condition of previous publication, by notification in the Official Gazette, make rules to carry out the provisions of this Act.’’. (11 of 1948.),  [Amendment of section 38.]

DR. G. NARAYANA RAJU,
Secretary to the Govt. of India. 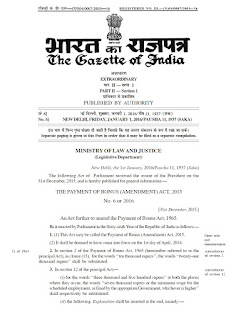 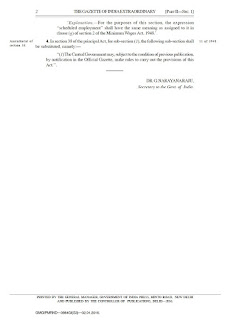